Watching all aspects of the US economy from outside of the propaganda zone sometimes feels like you are watching The Truman Show.

The Truman Show, for those who haven’t seen the 1998 Jim Carrey film, centered around a completely false town.  In the movie everything about the town was fake except for one person, Truman Burbank, who wasn’t in on the plot.  In a sense your average person in the US, particularly when it comes to the economy, is akin to Truman.  They have grown up inside this completely false environment and don’t even know it is all fake.

Virtually everything in The Truman Show-esque US economy is misinformation and completely skewed in which the creators, the US government, the Federal Reserve and the mainstream media constantly propagate blatantly false and wrong information and the American public, like Truman, have no idea that anything is even amiss.

The latest hilarious plot twist, at least for those of us watching it as observers and not intimately tied into the story, were the latest GDP numbers released showing a -1% annualized rate in the first quarter of this year.

GDP IS A FALLACY

I wrote over three years ago about how the “GDP Is A Fallacy“.  A fallacy being defined as an argument that uses poor reasoning.

For starters, to completely negate the entire concept, the total amounts of all goods consumed (which is what GDP really tries to track) in an economy can simply not be reliably calculated.

The GDP fallacy gives the impression that it is not the activities of individuals that produce goods and services, but something else outside these activities called the “economy.” However, at no stage does the so-called “economy” have a life of its own independent of individuals.

In the end it is just a bunch of numbers on a chalkboard that really signifies nothing of importance.

Furthermore, since GDP tracks consumption it is ridiculous to say that an economy grows when people consume more.  This makes sense to even small children who understand that you “grow” or get richer by saving not spending.

The following joke perfectly explains the ludicrosity of GDP.

Two Keynesian economists, John Maynard Keynes and Paul Krugman, were walking down the street one day when they passed two large piles of dog shit.
Keynes said to Krugman, “I’ll pay you $20,000 to eat one of those piles of shit.” Krugman agrees and chooses one of the piles and eats it. Keynes pays him his $20,000.
Then Krugman, feeling richer, says, “I’ll pay you $20,000 to eat the other pile of shit.” Keynes, feeling bad about the money he lost says okay, and eats the shit. Krugman pays him the $20,000.
They resume walking down the street.
After a while, Krugman says, “You know, I don’t feel very good. We both have the same amount of money as when we started. The only difference is we’ve both eaten shit.”
Keynes says: “Ah, but you’re ignoring the fact that we’ve increased the GDP by $40,000.

That is really all you need to know about GDP… it’s all dogshit.

Of course, the mainstream media loves these numbers, as it gives them something to drone on about and put their own spin on.  The reaction to the most recent release of a -1% annualized GDP number by Bloomberg takes the cake in spinning this to meet their “recovery” propaganda.

Even if you are so economically retarded as to think GDP is an important statistic then you would think that a negative GDP number would be a negative in terms of the “recovery” meme that mainstream media continues to peddle.  Not so fast!

Bloomberg has managed to take this negative number and say it is a positive!

Here is what Bloomberg had to say in their article, “The GDP Drop Is Good For The US Economy“:

Most of the decline in gross domestic product occurred because companies slowed the pace of inventory accumulation, according to data released on Thursday by the Bureau of Economic Analysis. In other words, output slowed because they weren’t producing as much stuff to go on shelves. Now companies have an incentive to speed up production to rebuild those inventories.

So, there you have it, in The Truman Show-esque world of US economics even a drop in the GDP is a good thing for the US economy!

And, of course, they repeated what Janet Yellen recently said, that “cold weather” had slowed the economy in the first quarter!  This, while at the same time saying that Global Warming is an urgent issue.

It’s no wonder so many Americans are on anti-depressants and drinking themselves into a stupor when they live in such a bizarro world.

The government and media in the US continue to pound the table about a US recovery for which there is no evidence.  In the past they used to call it the Goldilocks recovery, which was very apt, since it was never anything but a fairy tale.

All one has to do is look at the percentage of the US population currently employed to see there is and has been no recovery whatsoever. 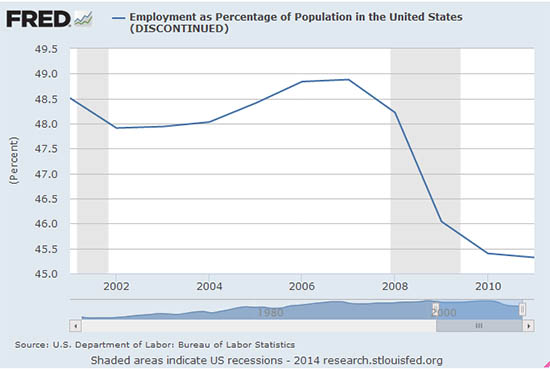 But, some may say, “Yes, but the US is an entrepreneurial culture and self-employed people will grow the economy”.

Not so fast. Entrepreneurship is at an all-time low, as you can see by this chart provided by Inc. 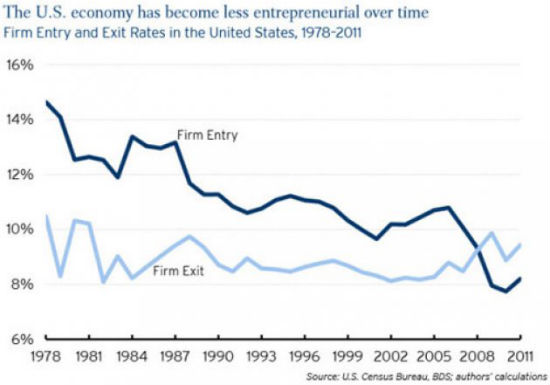 And you can see that the employment level for self-employed and unincorporated folks has also dropped: 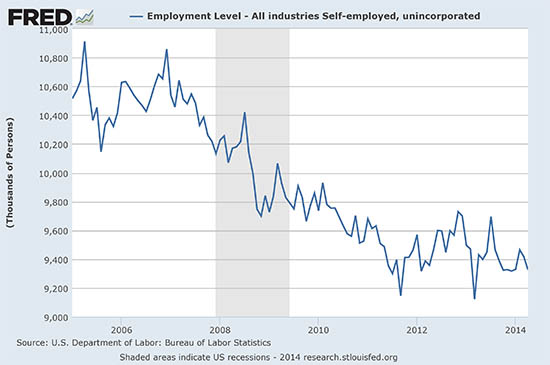 Scared to take chances, many Americans are staying put, choosing not to pursue new careers or starting their own business: 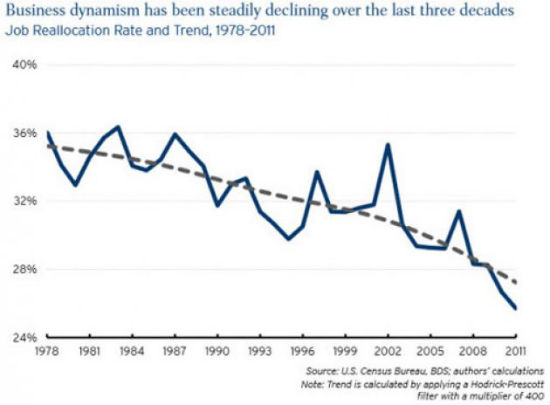 The truth is that the true GDP figure is much worse than -1% annualized.  This is because the statistics do not adequately take into account monetary inflation.

Currently the official CPI sits near 2% but if it were calculated solely the way it was calculated in the 1980s, before they learned to remove all of the inflation out of the CPI number, it is closer to 10% as shown here by this chart from ShadowStats.

This corresponds quite well with the actual true increase in the money supply itself which currently sits near 10% annualized as well. 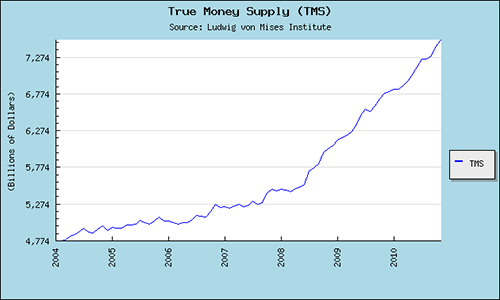 Given that the CPI as it was calculated in the 1980s is near 10% and the true money supply growth is also currently near 10% we can confidently say that current monetary inflation is in the area of 10%.

Since the GDP figures are adjusted to the heavily manipulated CPI (currently near 2%) we can say that the GDP figures, when adjusted for true inflation, is approximately -9% annualized.

In other words, the US is already deep into a depression that will become known in the next few years as the Greatest Depression.

THE SHOW IS ABOUT TO COME TO AN END

This is why, for us, watching the US today is like watching The Truman Show.  The average person is told all manner of things that are incorrect, wrong and fallacious via the media and the government and think it is real.

One day soon, though, like in the movie, your average person in the US is going to have their boat run up into the falsely erected walls and realize that everything they believed about the US economy was a lie.

By then the US economy will be a smoldering crater, the US dollar will have collapsed and capital and travel controls will be fully in place.