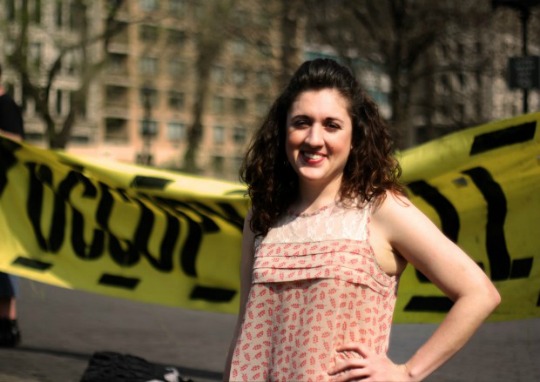 Cecily McMillan, the Occupy Wall Street organizer convicted of felony assault of the police officer she says sexually assaulted her, was sentenced Monday to three months in prison, five years of probation and community service.In a case that has shined a spotlight on what critics charge are systemic failures in the U.S. justice system, the sentence was met with immediate condemnation on Twitter:

In a statement following the sentence, support organization Justice for Cecily declared,

For many of us who consider ourselves to be part of the Occupy movement, there’s first and foremost a simple and deep sadness for a member of our community who has endured a painful and demeaning physical and sexual assault, and now has had her freedom taken away from her. And it’s painfully clear to us that Cecily’s case is not special. Sexual violence against women is disturbingly common, and there is a tremendous amount of over-policing and prosecutorial overreach by the police and the courts, enacted predominantly upon black and brown populations every single day, generation after generation.

The sentence was handed down by New York City Judge Ronald Zweibel despite widespread calls for no jail time from McMillan’s supporters, several city council members, and a majority of the jury that convicted her. A petition calling for McMillan to be released garnered over 170,000 signatures, and McMillan’s supporters said they delivered 700 letters to Zweibel calling for leniency, according to the Huffington Post.

Martin Stolar, criminal defense attorney affiliated with the National Lawyers Guild and co-counsel for McMillan’s case, has vowed to appeal the conviction.

Ahead of the sentencing, McMillan released a statement declaring:

Unlike most, when my trial began friends formed a support structure. Comrades came to court. Journalists reported injustices. When the verdict was read cries of outrage were heard, the news was spread, and sympathy was shared from around the world. Unlike most, during my weakest hour I had never felt more supported. Though I had never felt more oppressed, I had never felt so loved. I stand resolved to keep fighting because your love ethic props me up and allows me to do so. Unlike most, I am blessed with the support of so many, and though I am thankful, I am also thoughtful of the many forced to face such oppression alone.

Now 25 years old, McMillan was one of approximately 70 people detained late the night of March 17, 2012, when police violently cleared a memorial event marking the six-month anniversary of Occupy Wall Street. McMillan, who had stopped by the park to meet a friend, says she was sexually assaulted by police officer Grantley Bovell while she attempted to leave the area.

“Seized from behind, she was forcefully grabbed by the breast and ripped backwards,” according to a statement by support group Justice For Cecily. “Cecily startled and her arm involuntarily flew backward into the temple of her attacker, who promptly flung her to the ground, where others repeatedly kicked and beat her into a string of seizures.” Following the attack, McMillan underwent treatment for Post-Traumatic Stress Disorder.

Despite numerous allegations that Bovell has inflicted excessive force while on duty, as well as photograph and video evidence of injuries sustained by McMillan—including a hand-shaped bruise on her chest, it was McMillan who was put on trial for felony charges of assaulting Bovell.

According to McMillan’s supporters, what followed was a trial riddled with injustice, in which Zweibel showed repeated favoritism towards the prosecution. Zweibel imposed a gag order on McMillan’s lawyers, excluded key physical evidence, and ruled that information about Bovell’s past violent behavior, and violence the night of McMillan’s arrest, was not relevant to the case.

Upon her guilty verdict, McMillan was denied bail and immediately sent to Rikers Island, where she is currently detained.

According to Justice for Cecily, “The message this verdict sends is clear: What Cecily continues to endure can happen to any woman who dares to challenge the corporate state, its Wall Street patrons, and their heavy handed enforcers, the NYPD.”