A clearly irritated Sergei Lavrov – Russia’s Minister of Foreign Affairs – appeared on Bloomberg TV this morning and warned that “Ukraine is as close to civil war as you can get.” The minister further exclaimed that Russia “would like to understand how helicopters with a UN logo were used against protesters in the south-east,” adding that “Russia has serious suspicions that mercenaries from the USA are acting in Ukraine’s south-east.” Furthermore, Lavrov warned that “attempts to force Ukraine into NATO may have a strong negative impact on the whole system of European security.” But apart from that… BTFWWIII 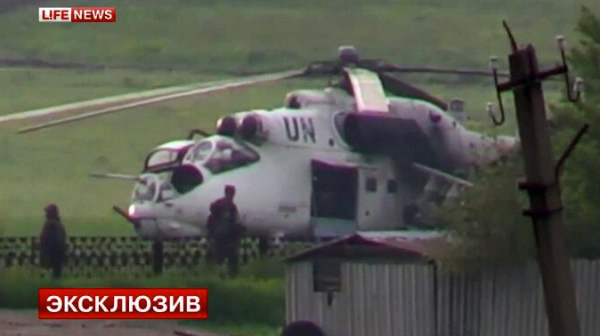 And the raw feed via LiveLeak:

Ironically – the UN also wants to know why…

The UN has voiced concerns over the apparent use of UN-marked helicopters by Kiev troops in their military operation against Donetsk regional militia. A video of a white-painted Mil Mi-24 strike helicopter with UN logo has emerged.

When inquired about the United Nations’ stance on the use of peacekeeper-marked military hardware in non-peacekeeper operations, the office for UN Secretary-General Ban Ki-moon’s spokesperson said such use would violate UN rules.

“It is the responsibility of Troop Contributing Countries (TCCs) that provide Contingent Owned Equipment to peacekeeping missions to remove all logos and signage bearing the UN’s name once such equipment has been repatriated to the home country or is no longer being used for official UN purposes,” the office told RT.

It added that UN-marked aircraft can be used for missions tasked by the UN and that UN’s Departments of Peacekeeping Operations and Field Support is in contact with the Ukrainian authorities to clarify the issue.

“Attempts to force Ukraine into NATO may have a strong negative impact on the whole system of European security, and we would be strongly opposing it,” he stressed. The minister added that this issue concerns not only Ukraine and NATO, but Russia as well.

According to Lavrov, Moscow urges to investigate the alleged Kiev’s using of helicopters with UN marks in the military operation in the country’s south-east. “Ukraine is as close to civil war as you can get,” the Russian minister emphasized. “We would like to understand how helicopters with UN logo were used against protesters in the south-east,” the minister said.

“Russia has serious suspicions that mercenaries from the USA are acting in Ukraine’s south-east,” Lavrov pointed out.

Commenting on the news about the start of the ‘round table’ on ways of settling the crisis in Kiev, the Russian minister noted that for the success of the national dialogue, Ukraine needs an equal participation of all the country’s regions in this process.

“I don’t know which the exact list of participants of the widely advertised ‘round table’ in Kiev is. We are convinced that for the success of the national dialogue, an equal participation of all Ukraine’s regions is needed, and not only of the south and east, but of the west as well,” Sergei Lavrov said.