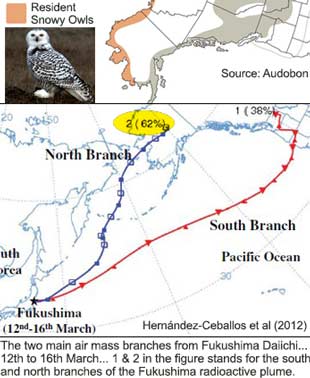 Campbell River Mirror, Feb. 18, 2014: Guest Speakers in the morning include Dr. Victoria Bowes, avian pathologist, with BC Min. of Agriculture, who will present “The Overwintering Snowy Owl Mortality Investigation”

Dr. Victoria Bowes, British Columbia Ministry of Agriculture, June 2013: In the winter of 2011, and again in 2012, an unexpected record number of overwintering Snowy Owls arrived along the southern coast of BC […] from the high Arctic already in poor body condition, and over a short period of time many of the weakened birds were admitted to local wildlife rehabilitators. Others […] were found dead or dying. […] The unanswered question was whether or not there were underlying predisposing factors that made these birds more vulnerable. In January 2013, and again in April, a team of investigators assembled […] to examine a total of 49 Snowy Owl carcasses […] the majority of birds in both necropsy sessions were emaciated adult or sub-adult males. An associated finding was carcass pallor accompanied by acute gastric and intestinal hemorrhage […] terminal intestinal hemorrhage has been recognized as a manifestation of severe physiologic stress […]

South China Morning Post, Jan. 20, 2013: […] snowy owls arrive in Vancouver […] worrying bird welfare experts […] The owls perch listlessly […] the second winter in a row that Vancouver has been treated to a visit […] raising concern among experts who say the owls should normally only visit Vancouver every five or so years […] some of the birds are badly emaciated.

Rob Hope, Orphaned Wildlife Rehabilitation Society: Some were suffering from asperogillosis, a breathing problem […] that can be triggered by a weakened immune system or malnutrition. [Owls arrived in] November, earlier than they would normally venture so far south […] “We have been finding a lot in very poor condition by the time they arrive. They are already in a weakened state.”

– NBC: Record level of sick or injured California seals and sea lions turning up – ‘The numbers are extraordinary’ – ‘Scientists worried… The worst kind of perfect storm’ – Pups should be weighing 2 or 3 times as much, ‘severely malnourished’

– ‘Ultra-Rare’: Up To 70 Endangered False Killer Whales By California Coast

– Head Of Radiation Testing Program On West Coast: Fukushima Plume Could Threaten Ecosystems … Whatever Is In The Kelp Will Get In Bodies Of Those Animals Also

– Massive Die-Off Of Oysters And Scallops In Pacific Northwest: ‘Millions Of Shellfish Dying’ – ‘By July Mortality Hit 95 To 100 Percent’

– 60 Bald Eagles Dead In Utah Since December (Not From West Nile Virus) (See related article below.)

– L.A. Times: Alarming West Coast sardine crash likely radiating through ecosystem — Experts warn marine mammals and seabirds are starving, may suffer for years to come — Boats return without a single fish — Monterey Bay: Hard to resist idea that humpback whales are trying to tell us something

– ‘We see radiation from Fukushima in soils in Southern California, especially our desert regions’ – High concentrations in seaweed prevented harvest this year — Also found in cattle and chicken feed

– Scientists: Starfish Wasting Disease Outbreak Could Be Due To Fukushima Radiation