As we reported last Friday, a second US warship, the destroyer Donald Cook, crossed the Bosphorus last week and entered the Black Sea at precisely the time when NATO was arguing that its encroaching presence around Russia should not spook anyone. Apparently it spooked someone, namely Russia, which over the weekend decided to give the Americans a warm welcome. As AP reports, “A U.S. military official says a Russian fighter jet made multiple, close-range passes near an American warship in the Black Sea for more than 90 minutes Saturday amid escalating tensions in the region.” 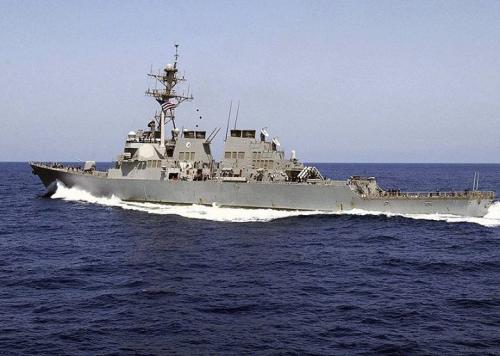 The official says the fighter flew within 1,000 yards of the USS Donald Cook, a Navy destroyer, at about 500 feet above sea level, saying this prompted ship commanders to issue several radio warnings. The fighter appeared to be unarmed and the passes ended without incident.

In the first public account of the incident, the official said the Russian Fencer flew within 1,000 yards of the USS Donald Cook, a Navy destroyer, at about 500 feet above sea level. Ship commanders considered the actions provocative and inconsistent with international agreements, prompting the ship to issue several radio queries and warnings.

The fighter appeared to be unarmed and never was in danger of coming in contact with the ship, said the official, who was not authorized to talk publicly by name about the encounter so spoke on condition of anonymity. The passes, which occurred in the early evening there, ended without incident.

The official also said that a Russian Navy ship, a frigate, has been shadowing the U.S. warship, remaining within visual distance but not close enough to be unsafe.

The USS Donald Cook has been conducting routine operations in international waters east of Romania. The ship, which carries helicopters, was deployed to the Black Sea on April 10, in the wake of the Russian military takeover of Ukraine’s Crimea region and ongoing unrest there.

It is unclear if Russia was simply marking what is clearly considers its own expanded territorial waters, or if the Su-24 pilots were just being friendly.

Curious where the ship is now? It is currently at anchor in the Romanian port of Constanca where it welcomed the country’s president Basescu: 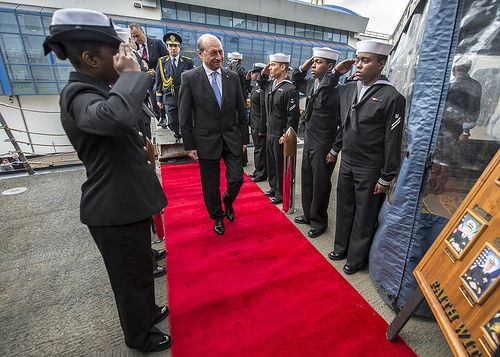 President Basescu was met by members of the U.S. Embassy and Donald Cook’s commanding officer Cmdr. Scott Jones. He was then given a tour of the ship, including the Navigation Bridge, Combat Information Center and Engineering Control. 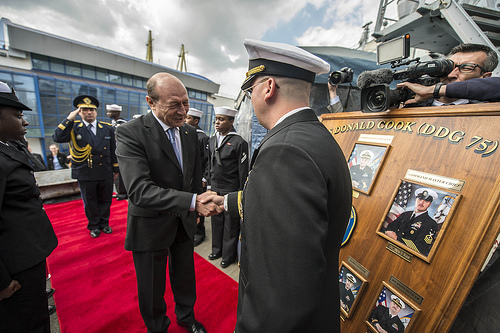 Donald Cook, the first of four Arleigh Burke-class destroyers to be forward-deployed to Rota, Spain, is serving on a scheduled patrol in the U.S. 6th Fleet area of operations as part of the President’s European Phased Adaptive Approach (EPAA) to ballistic missile defense in Europe. 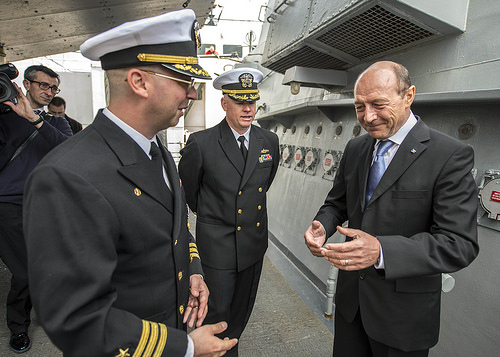 U.S. 6th Fleet, headquartered in Naples, Italy, conducts a full range of maritime security operations and theater security cooperation missions in concert with coalition, joint, interagency, and other parties in order to advance security and stability in Europe and Africa.

And to confirm that military overflights are hardly an isolated event around the Ukraine, moments ago photos were taken of a military helicopter flying over downtown Donestk in the east Ukraine, which as is widely known, is largely in the hands of “pro Russian separatists.”