– An Iowa City with a Population of 7,000 Will Receive Armored Military Vehicle (Liberty Blitzkrieg, April 9, 2014):

I’ve covered the militarization of the domestic police force on several occasions on this website. For those of you who need a refresher, I suggest reading the following:

There are Over 50,000 SWAT Team Raids Annually in America

Moving along to the subject of today’s absurdity, the tiny city of Washington, Iowa with a population of 7,000 and 11 police officers, will be receiving a Mine Resistant Ambush Protected (MRAP) vehicle. Yes, they will be employing one of these in the field: 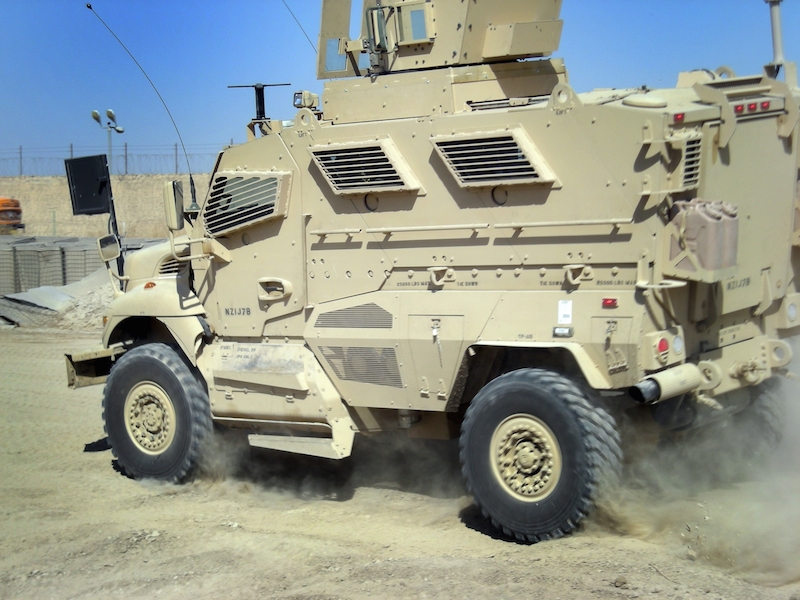 These things normally cost $500,000, but will be given to Washington, Iowa for free under a Defense Department program that gives surplus military equipment to domestic law enforcement.

Matthew Byrd writes in the Daily Iowan that:

Sometimes the news is just so drearily awful that you have to sit back and almost appreciate the pure comedy induced by it.

Take this item from Washington, Iowa, where the local police have recently acquired an MRAP vehicle (short for Mine Resistance Ambush Protected) through a Defense Department program that donates excess vehicles originally produced for the wars in Iraq and Afghanistan to local police departments across the United States, including other Iowa towns such as Mason City and Storm Lake.

The MRAP weighs an impressive 49,000 pounds, stands 10-feet tall, and possesses a whopping six-wheel drive. Originally designed to resist landmines and IEDs, it sure seems like the MRAP will come in handy for the notorious war zone otherwise known as Washington County, Iowa.

If you’re having a bad day, I highly recommend watching a video produced by the Des Moines Register in which Washington police officials try to justify the possession of a vehicle it clearly has no use for. The excuses range from school shootings (which are an actual concern but an MRAP seems like overkill) to a terrorist attack happening in central Iowa (because if there’s any place that seems ripe for a high-profile terrorist attack it’s Washington, Iowa, population 7,000).

As Radley Balko, the author of the book The Rise of the Warrior Cop, an expose of the police militarization of the last decade, found, in 2006 alone the Pentagon, “distributed vehicles worth $15.4 million, aircraft worth $8.9 million, boats worth $6.7 million, weapons worth $1 million and “other” items worth $110.6 million to local police agencies.”

The effects of cops moving from handguns to assault rifles and being equipped with tanks, bazookas, and Kevlar has been twofold. First, civil liberties have absolutely been eroded, with police-brutality rates skyrocketing in last decade according to the Justice Department. Not only that, but, with the influx of military gear into local police forces, cops begin to view themselves as soldiers whose main job is combat rather than keeping the peace. How else can you explain the rise in police shootings since 9/11?

Keep chanting like idiots until one of these rolls up to your doorstep.

1 thought on “An Iowa City With A Population Of 7,000 Will Receive Armored Military Vehicle”