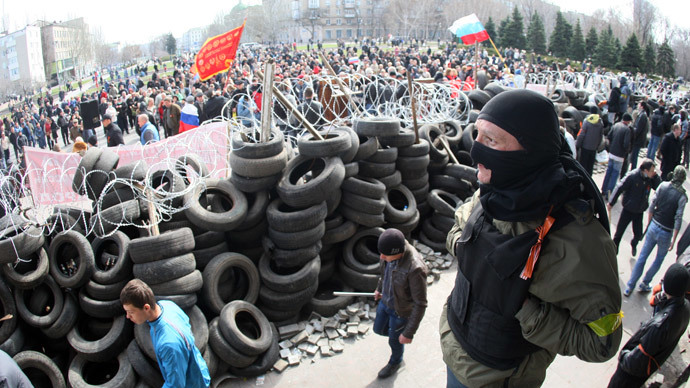 In the eastern Ukrainian city of Donetsk, a group of activists have declared their region independent from Kiev. This comes after protesters stormed a local government building last night.

Mass demonstrations against the country’s new leadership started peacefully on Sunday, but the situation quickly escalated.

Pro-Russian protesters in Donetsk have seized the local power building, including the headquarters of the Security Service of Ukraine and proclaimed the creation of a People’s Republic of Donetsk.

Ukraine’s police and security services have not interfered, although officials in Kiev are threatening punishment for the rioters.

Protesters have erected barricades around the Council building.

Today at 12:20 local time, a session of the people’s Council of Donbass (Donetsk region) took place in the main hall of the Regional Council and unanimously voted on a declaration to form a new independent state: the People’s Republic of Donetsk.

The Council proclaimed itself the only legitimate body in the region until the regions in southeast Ukraine conduct a general referendum, set to take place no later than May 11.

“The Donetsk Republic is to be created within the administrative borders of the Donetsk region. This decision will come into effect after the referendum,” the statement said.

The Council in Donetsk issued an address to Russian President Vladimir Putin, asking for deployment of a temporary peacekeeping force to the region.

“Without support it will be hard for us to stand against the junta in Kiev,” said the address.

“We are addressing Russian President Putin because we can only entrust our security to Russia,” the statement said.

Ukraine’s Ministry of Interior said that last night unknown persons stormed the Security Service of Ukraine building in the city of Lugansk and seized a weapons warehouse there. During the night’s clashes, nine people were reportedly injured.

There were brief clashes between supporters of the federalization of Ukraine and pro-EU demonstrators in downtown Kharkov. Protesters on both sides used fire crackers and stun grenades.

A demonstration against political repression in Ukraine has also being held in the southern regional center of Odessa.

The chiefs of security agencies of Ukraine are reportedly heading to the cities engulfed in protests.The interim secretary of the National Security and Defense Council of Ukraine, Andrey Parubiy, together with acting head of the Security Service of Ukraine, Valentin Nalivaichenko, are set to visit Lugansk. Interim Deputy Prime Minister Vitaly Yarema will visit Donetsk and acting Interior Minister Arsen Avakov has reportedly already arrived in Kharkov.

The coup-appointed acting president, Aleksandr Turchinov, has threatened that counter-terrorist measures could be taken against those who take up arms against the Kiev authorities, RIA news agency reported. On Thursday, the Ukrainian parliament will tighten laws regarding separatism and could possibly ban certain parties and organizations , Turchinov warned.

“What happened yesterday is the second stage of the special operation of the Russian Federation against Ukraine,” announced Turchinov in an address televised on Monday, sharing that an “anti-crisis command was set up last night” to deal with the crisis, Interfax-Ukraine reported.

Ukraine’s interim Foreign Minister Andrey Deschitsa announced on Monday that if the situation in the eastern regions escalates, the coup-appointed government in Kiev will take “much harsher” measures than those on the reunion of the Crimea with Russia. Deschitsa gave an assurance that members of the government are already working with local authorities.