Domestic prices in Europe will go up by at least 50 percent, if it cuts supplies from Russia, according to Russia’s Energy Minister Alexandre Novak .

“Moving away from pipeline transportation of natural gas, construction of terminals and deliveries of liquefied natural gas will lead to an increase in gas prices in Europe from the current $380 per 1,000 cubic metres to at least $550,” Novak said in an interview to the Russia 24 TV Channel.

“And the question arises: are the economies of European countries ready to supply and consume gas at such a price?” the Minister asked.

The US has insisted that Europe needs to urgently cut its dependence on Russian gas, with the US Secretary of State John Kerry saying Moscow shouldn’t use energy exports as a political weapon.

“It really boils down to this: no nation should use energy to stymie a people’s aspirations,” Kerry said in Brussels on Thursday, the same day Russia’s Gazprom increased the price to Ukraine another $100 per 1,000 cubic metres.

On Wednesday the US and EU reaffirmed their plan to move away from Russian gas, stressing that developments in Ukraine “have brought energy security concerns to the fore” .

Meanwhile, Russian energy companies have started to feel the pulse in markets outside Europe, mostly focusing on Asia.

Gazprom talked to Kuwait and Egypt about increasing LNG supplies and hopes to sign a long-term supply deal with China next month. Also, the president of Russia’s oil major Rosneft has toured Japan, South Korea, Vietnam and India. 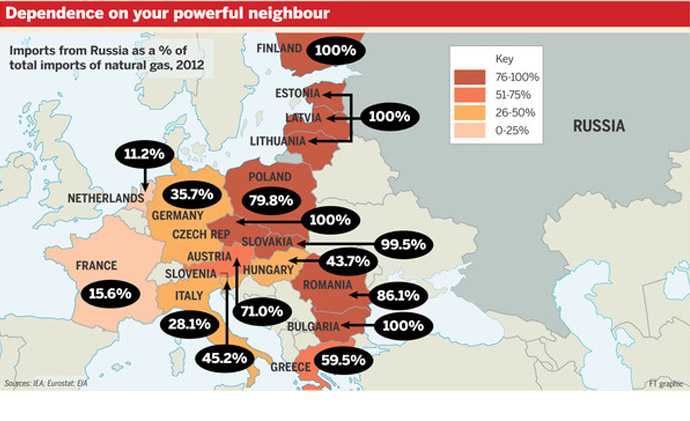 While in theory there are some alternatives to Russian gas that include supplies of liquefied natural gas (LNG) from Qatar and Nigeria and shale supplies, both domestic and America’s, a more in-depth analysis shows that moving away from Russian gas would be painful for Europe.

A study by Bernstein Research, a widely-recognized Wall Street research and brokerage firm, says that cutting off Russian gas would cost $160 for every single person in Europe. The costs include extra expenses to get rid of 15 billion cubic meters (bcm) of residential and industrial gas demand, a $215 billion investment and additionally $37 billion annually in the form of higher energy bills.

“Like it or not, but Europe is stuck with Russian gas,” the Financial Times quotes Bernstein’s Oswald Clint.

If Europe is really determined to cut its energy dependence on Russia, it needs to take radical measures. This could include switching to diesel power, closing the oil refining industry, reducing gas consumption in heating and adding more ecologically unfriendly coal-fired generation, Clint said.

The “take-or-pay” contracts with Gazprom are another string that could keep Europe within Moscow’s energy orbit. These deals mean a buyer is bound to either buy a minimum volume of energy or pay the supplier a penalty. Under such contracts some of the Europe’s top energy companies including ENI, Edison and RWE are obliged to pay Russia’s Gazprom an estimated $50 billion. Many of these deals stretch beyond 2020, the FT says.

Last week the head of the Duma’s foreign relations committee Alexei Pushkov said that Europe’s“energy independence” plan “is not a prospect for the next few years,” adding that by that time Russia will find alternative export markets.

1 thought on “Gas Prices In Europe To Rise 50%, If It Abandons Russia’s Supplies – Energy Minister”