The chart below from Bank of America – showing the progression of first-time US homebuyers in recent months – should scare everyone who still believes that there is some sort of “housing recovery” in the US. 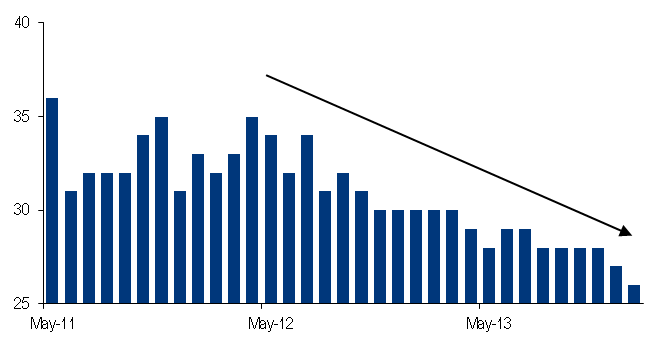 What this chart tells us is that an increasingly greater amount of existing homes is being sold not to people who want to live in them, but speculators who are merely seeking to flip to a greater fool, or worse, to Chinese and Russian olilgarchs who are simply seeking a place where to park hot money or simply launder other ill-gotten cash.

So what explains this collapse in the traditional housing pathway, where people buy houses to live in them? Simple. Record debt. Only not the credit card debt variety which historically was the biggest impediment to large purchases and was among the reasons for the 2007 credit bubble pop. This time it is all student debt.

NAR President Steve Brown, co-owner of Irongate, Inc., Realtors in Dayton, Ohio, said student debt appears to be a factor in the weak level of first-time buyers. “The biggest problems for first-time buyers are tight credit and limited inventory in the lower price ranges,” he said. “However, 20 percent of buyers under the age of 33, the prime group of first-time buyers, delayed their purchase because of outstanding debt. In our recent consumer survey, 56 percent of younger buyers who took longer to save for a downpayment identified student debt as the biggest obstacle.”

Brown notes the survey results are for recent homebuyers. “It’s clear there are other people who would like to buy a home that are not in the market because of debt issues, so we can expect a lingering impact of delayed home buying,” Brown added.

As a reminder, in Q4 student debt rose to a record $1.08 trillion, and continues to rise at a breakneck pace.

But… but… what happened to the whole “the US consumer has deleveraged and can’t wait to go on a spending spree” fable again?