– Hacked Email from U.S. Army Attache in Ukraine – For False Flags to occur so U.S. can take military action against Russia (Sherry Questioning All, March 12, 2014): 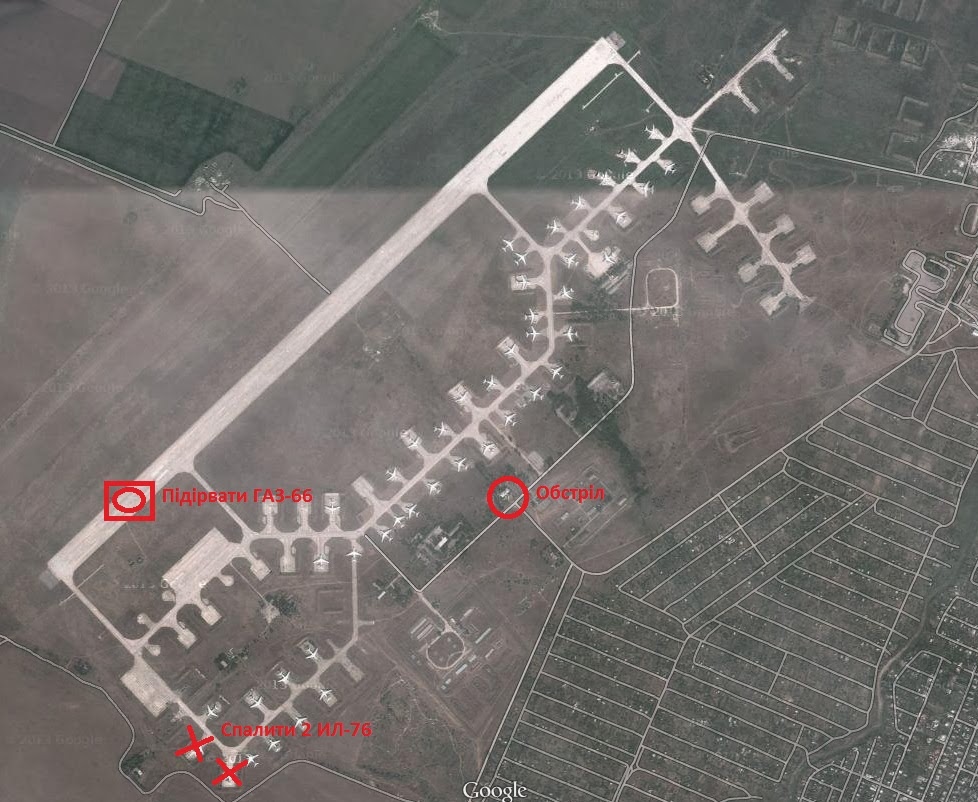 Image in one of the hacked emails, I got out of the file share download of all them. (3/13/14)  This image was in the email to Igor about framing Russia for bombings.  Notice the Red Xs.

Putin is a big thorn in the U.S. side and they want to do something about him.  The U.S. created the problem in Ukraine to be able to control the country and the resources.  The U.S. was/is behind the revolution due to them wanting the President out who was pro Russia and not Europe.

The U.S. and Western governments inserted a Pro-European acting President.  That President even called on the U.S. giving them nuclear weapons a couple of days ago.

KIEV, Ukraine — Ukraine may have to arm itself with nuclear weapons if the United States and other world powers refuse to enforce a security pact that obligates them to reverse the Moscow-backed takeover of Crimea, a member of the Ukraine parliament told USA TODAY.

The U.S. went in and got all of Ukraine’s gold reserves and flew it to the U.S. for ‘safe keeping’.

A source in the Ukrainian government confirmed that the transfer of the gold reserves of Ukraine to the United States was ordered by the acting PM Arseny Yatsenyuk.

Now, if anyone is willing to read the TRUTH about Ukraine and the history of what is happening and why, this article details the TRUTH about the situation.   It is a long article but it is worth the read, because it is of course about the resources that Ukraine has and how the Western governments want those, besides to in dept the country through IMF loans.    Russia was staying out of Ukraine’s problems overall, until they got forced into it, with the U.S. causing the revolution.

Remember China has come out and blamed the U.S. for what is happening in Ukraine.

We know how the U.S. will create false flags so they can do a military action, just like they tried in Syria, with the chemical attack that was really caused by Saudi Arabia.

A Jason Gresh emails were hacked, he is the Assistant Army Attache at the U.S. embassy in Ukraine.  The emails discuss setting up bombs and a false flag to blame Russia.  As he says in the email, so “the Pentagon and Company can act.”

What he means by company, I would love to know.  What company is this?   The U.S. government?  Is that the ‘company’ he means?

Video with the hacked email from Jason Gresh to the acting Ukraine PM assistant:

http://depositfiles.com/files/nsj5poqlb  – I have opened up the file.  There are lots of emails in it from the people involved.    For those not believing the hacked emails, just look at the files.  All of their emails were gotten.  These are real.  Also Silence says a lot from the media and governments.
Image at top in one of the emails, I got from when I downloaded the file share.))

Translated Emails from Ukrainian to English below video:

Email from Jason Gresh:
Events are moving rapidly in Crimea. Our friends in Washington expect more decisive actions from your network.
I think it’s time to implement the plan we discussed lately. Your job is to cause some problems to the transport hubs in the south-east in order to frame-up the neighbor.
It will create favorable conditions for Pentagon and the Company to act.
Do not waste time, my friend.

Oleg , an urgent need poshumity on behalf of Russians at the airport in Melitopol. This should be done by March 15 . Sam understands why.
First of all you must contact Pasha Tarasenko. You must know him , he is a local Liberty and has a theme.
Before you arrive 10-12 boys from the Centre. Top fighters Trident . Chief Mike there , you should know it too . Details will know him. We need people to meet and provide everything you need.
Proceed with caution. Speak only Russian. 25 team is executing combat missions , so do not do them much damage to aircraft . There is a lot of scrap metal, with it you can do anything . Damaged aircraft you specify. It is essential that all was as real attack neighbor’s Special Forces. But without corpses.
Give me again your account. The money will come in time, do not worry.
See the appendix . This is an example of action. Decisions are made in person.

Basil , you must quickly carry out proactive in Melitopol. There’s 25 aviation brigade . Must zamaraty our sworn friends and good neighbors. I think you understand me.
Just proceed carefully and cautiously. 25 brigade combat mission out , so do not do them much damage to aircraft . There is already damaged aircraft , that He can do everything. Yihny board numbers you give. Remember , you need everything to be as real attack of the Russian Special Forces.
Brigade commander there is a reasonable man . Details of know he will not, but in extreme cases it can turn to. We did come.

5 thoughts on “Hacked Email From U.S. Army Attache In Ukraine – For False Flags To Occur So U.S. Can Take Military Action Against Russia”