– Study: Fukushima airborne plumes “caused significant deposition of radioactivity over North America” — Especially for West Coast and eastern U.S. — Around 13% of all radioactive iodine released into atmosphere was deposited over USA and Canada (MAP) (ENENews, Feb 14, 2014): 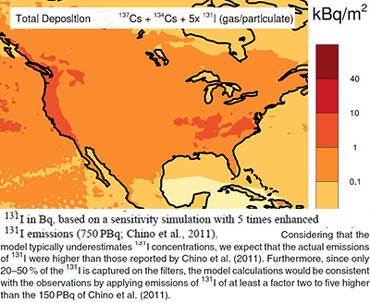 European Commission, Science for Environment Policy News Alert (pdf): The 2011 nuclear accident at Fukushima, Japan, caused the release of large amounts of radionuclides (unstable atoms that produce radioactive emissions) to the atmosphere. Caesium and iodine radionuclides can negatively affect human health through the contamination of air, water, soil and agricultural products. The EU-funded study1 modelled the global spread of radionuclides of caesium and iodine from Fukushima in the atmosphere […] or iodine radionuclides […] meteorological conditions and convection promote more long-distance transport. This is because iodine does not dissolve as easily as caesium so it remains in a gaseous form and is redistributed by convection to the troposphere (lowest part of atmosphere) where the wind speed is greater and transports the iodine greater distances. The model results suggest that 12.7% of iodine radionuclides were deposited over the USA and Canada […] Approximately 50-60% was deposited locally in Japan.

Modelling the global atmospheric transport and deposition of radionuclides from the Fukushima Dai-ichi nuclear accident (pdf), 2013: […] meteorological conditions associated with convection and vertical mixing over the Pacific Ocean promote its longdistance transport so that it contributes to radioactivity deposition worldwide. Our model results suggest that the plumes that traversed the Pacific Ocean caused significant deposition of radioactivity over continental North America, in particular western USA, western Canada and eastern USA (>100 Bqm−2). Our model results also show substantial deposition of radionuclides in regions southwest of Japan, e.g., around the Philippines1. Two weeks after the accident, all operational CTBTO stations in the northern hemisphere had reported at least one 131I detection.