– 22 Facts About The Coming Demographic Tsunami That Could Destroy Our Economy All By Itself (Economic Collapse, Feb 10, 2014):

Today, more than 10,000 Baby Boomers will retire.  This is going to happen day after day, month after month, year after year until 2030.  It is the greatest demographic tsunami in the history of the United States, and we are woefully unprepared for it.  We have made financial promises to the Baby Boomers worth tens of trillions of dollars that we simply are not going to be able to keep.  Even if we didn’t have all of the other massive economic problems that we are currently dealing with, this retirement crisis would be enough to destroy our economy all by itself.  During the first half of this century, the number of senior citizens in the United States is being projected to more than double.  As a nation, we are already drowning in debt.  So where in the world are we going to get the money to take care of all of these elderly people?

The Baby Boomer generation is so massive that it has fundamentally changed America with each stage that it has gone through.  When the Baby Boomers were young, sales of diapers and toys absolutely skyrocketed.  When they became young adults, they pioneered social changes that permanently altered our society.  Much of the time, these changes were for the worse.

According to the New York Post, overall household spending peaks when we reach the age of 46.  And guess what year the peak of the Baby Boom generation reached that age?…

People tend, for instance, to buy houses at about the same age — age 31 or so. Around age 53 is when people tend to buy their luxury cars — after the kids have finished college, before old age sets in. Demographics can even tell us when your household spending on potato chips is likely to peak — when the head of it is about 42.

Ultimately the size of the US economy is simply the total of what we’re all spending. Overall household spending hits a high when we’re about 46. So the peak of the Baby Boom (1961) plus 46 suggests that a high point in the US economy should be about 2007, with a long, slow decline to follow for years to come.

And according to that same article, the Congressional Budget Office is also projecting that an aging population will lead to diminished economic growth in the years ahead…

Lost in the discussion of this week’s Congressional Budget Office report (which said 2.5 million fewer Americans would be working because of Obamacare) was its prediction that aging will be a major drag on growth: “Beyond 2017,” said the report, “CBO expects that economic growth will diminish to a pace that is well below the average seen over the past several decades [due in large part to] slower growth in the labor force because of the aging of the population.”

So we have a problem.  Our population is rapidly aging, and an immense amount of economic resources is going to be required to care for them all.

Unfortunately, this is happening at a time when our economy is steadily declining.

1. Right now, there are somewhere around 40 million senior citizens in the United States.  By 2050 that number is projected to skyrocket to 89 million.

3. One poll discovered that 26 percent of all Americans in the 46 to 64-year-old age bracket have no personal savings whatsoever.

4. According to a survey conducted by the Employee Benefit Research Institute, “60 percent of American workers said the total value of their savings and investments is less than $25,000”.

5.67 percent of all American workers believe that they “are a little or a lot behind schedule on saving for retirement”.

6. A study conducted by Boston College’s Center for Retirement Research found that American workers are $6.6 trillion short of what they need to retire comfortably.

7. Back in 1991, half of all American workers planned to retire before they reached the age of 65.  Today, that number has declined to 23 percent.

8. According to one recent survey, 70 percent of all American workers expect to continue working once they are “retired”.

9. A poll conducted by CESI Debt Solutions found that 56 percent of American retirees still had outstanding debts when they retired.

11. Today, only 10 percent of private companies in the U.S. provide guaranteed lifelong pensions for their employees.

12. According to Northwestern University Professor John Rauh, the total amount of unfunded pension and healthcare obligations for retirees that state and local governments across the United States have accumulated is 4.4 trillion dollars.

15. If the U.S. health care system was a country, it would be the 6th largest economy on the entire planet.

20. Right now, there are approximately 63 million Americans collecting Social Security benefits.  By 2035, that number is projected to soar to an astounding 91 million.

21. Overall, the Social Security system is facing a 134 trillion dollar shortfall over the next 75 years.

22. The U.S. government is facing a total of 222 trillion dollars in unfunded liabilities during the years ahead.  Social Security and Medicare make up the bulk of that.

So where are we going to get the money?

The generations following the Baby Boomers are going to have to try to figure out a way to navigate this crisis.  The bright future that they were supposed to have has been destroyed by our foolishness and our reckless accumulation of debt.

But do they actually deserve a “bright future”?  Perhaps they deserve to spend their years slaving away to support previous generations during their golden years.  Young people today tend to be extremely greedy, self-centered and lacking in compassion.  They start blogs with titles such as “Selfies With Homeless People“.  Here is one example from that blog… 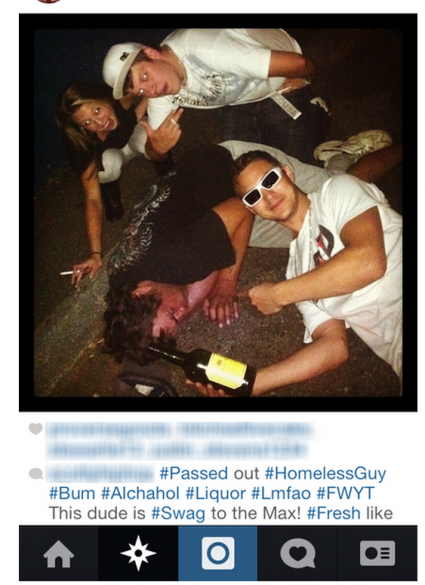 Of course not all young people are like that.  Some are shining examples of what young Americans should be.

Unfortunately, those that are on the right path are a relatively small minority.

In the end, it is our choices that define us, and ultimately America may get exactly what it deserves.