Last week, more than 550 groups, representing tens of millions of individual members, signed a letter to members of Congress urging them to vote against a push by President Obama for ‘fast track’ authority for the Trans-Pacific Partnership, a so-called “free trade” now under negotation between the U.S. and eleven other Pacific rim nations.

The week before that, another 50 groups launched an energized online campaign called StopFastTrack.com in order to kill the TPP agreement—dubbed “NAFTA on steroids”—that they say “threatens everything you care about: democracy, jobs, the environment, and the Internet.”

But if you watch the evening cable or broadcast news shows, you might not know anything about the TPP—not what it is, not why Obama says it would be good for the country, and certainly not why these hundreds of public interest groups, environmentalists, economists, and labor organizations say trade agreements like this are the source of economic and labor woes, not the solution to them.

According to a new study by Media Matters, over the last sixth months the network evening news shows—including ABC, NBC, CBS, and PBS—have ignored the TPP almost completely.

After reviewing transcripts of CBS Evening News with Scott Pelly, ABC’s World News with Diane Sawyer, and NBC Nightly News with Brian Williams from August 1, 2013 through January 31, 2014, Media Matters found no mention of the Trans-Pacific Partnership. Not a single one.

The PBS Newshour did only slight better by having one guest mention the TPP on exactly one occassion when a representative for the Carnegie Endowment for International Peace argued on the show “that approving the TPP would improve relations with Asian nations.” 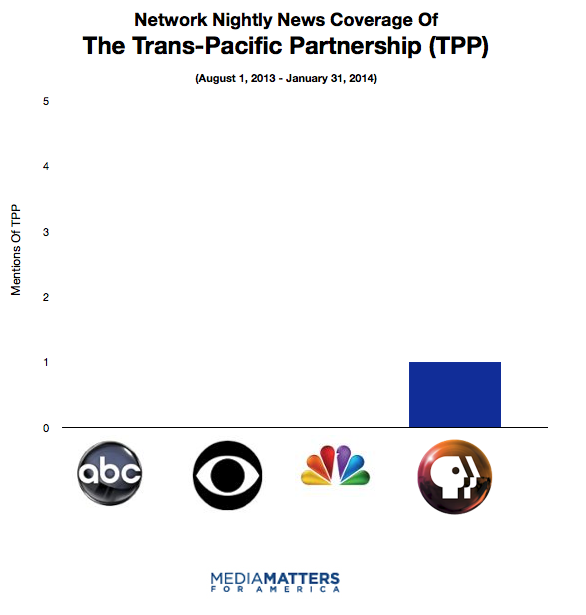 And the evening cable news shows did little better, with just one show on MSNBC—The Ed Show—offering any routine coverage of the issue while CNN mentioned the TPP only once during the six-month period, and FOX News making no mention of it at all. 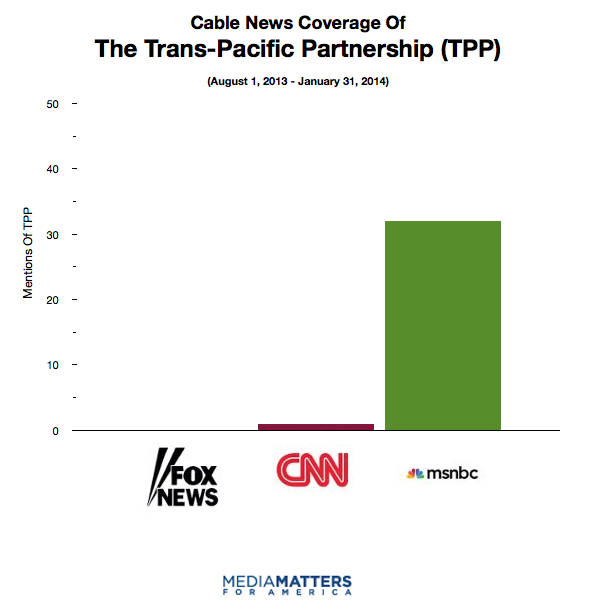 Though the nations involved in the talks, as Media Matters notes, “account for nearly 40 percent of the world’s GDP and 26 percent of the world’s trade,” it seems odd that the pending trade deal is receiving so little mainstream coverage even as the amount of opposition it’s receiving is so widespread among those trying to promote a more democratic, progressive, and more visionary trade paradigm.

Then again, perhaps it’s not odd at all.