So a robot finds a leak [while] doing work, now all of a sudden this means a lot of things. First of all, this means the water that was supposed to be, this is going to be my best guess – where is the water coming from? Tepco actually also said this water was supposed to be for the cooling of Unit 3, which means its highly radioactive after it comes out. This is what else it means — if a robot incidentally finds a leak when it’s sent into a specific area to do some work, how many other leaks haven’t they discovered yet? You have to ask that question too. I’m going to expect to find many different kinds of leaks. So that means that all the cooling that you’d expect to be getting from the cooling water system that pretty much was flimsily, hastily tossed together is not doing the complete job. […] 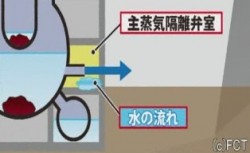 It also means that the containment’s broken like we thought about a long time ago, in this case Tepco believes that […] one of the main steam line penetrations, which are very durable in this case, is no longer that durable, it’s porous. The radioactive water is coming from inside the containment vessel itself. So it means a lot of things, also the water is very heavily laden with radioactive contaminants. It’s basically floating freely to wherever it’s going, probably to the basement of the reactor building, and in this case we know the reactor is porous also, so there’s really no containment at Unit 3.