Last year, Apopo received international funding of $4.5m (£2.7m) from various donors and cleared 618 acres of mined land in Mozambique. This year it is redeploying 78 rats to continue the work.

Eradicating landmines from the country this year would mean Mozambique would fulfil its obligations under the Ottawa treaty, an agreement it signed in 1997 and which came into effect in March 1999. Signatories were required to clear all mines from their land within 10 years, but Mozambique was given a five-year extension in 2009. In December, the country requested a further 10-month extension, which would allow it to complete the work by New Year’s Eve 2014.

Tesfazghi Tewelde, manager of Apopo’s mine-clearance programme in Mozambique, says he hopes the country will meet this latest deadline, since there is only an area the size of 1,400 football pitches left to clear. 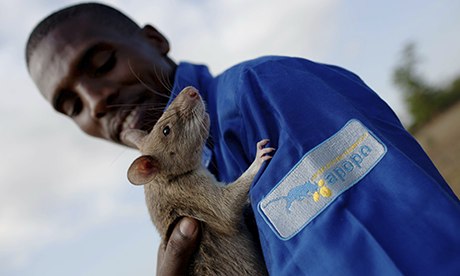 Mozambique is in a strong position to complete the demining operation, he says, thanks largely to the country’s National Institute for Demining, which co-ordinates the efforts of several mine-clearing organisations.

Mozambique experienced 16 years of civil war between 1977 and 1992. Although the fighting has stopped, the tens of thousands of landmines left behind continue to claim lives.

“Although the number of accidents drops as we get closer to the end, where there are landmines, the threat is real as people are still being killed or maimed,” Tewelde says.

Apopo has discovered and safely destroyed nearly 2,500 landmines in the country as well as more than 14,000 pieces of unexploded ordnance, small arms and ammunition, and returned approximately 2,001 acres to local communities. 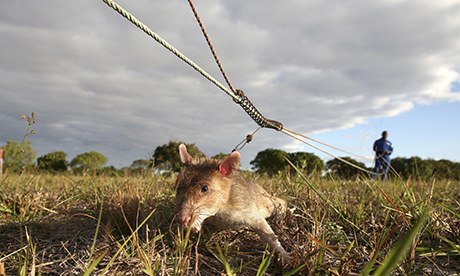 An Apopo-trained rat sniffs for landmines in Inhambane, Mozambique. The country aims to be free from mines this year. Photograph: Pedro Sa Da Bandeira/EPA

“The target is not the number of landmines, rather it is to clear the contaminated area and give back to the people,” Tewelde says. “Whether [landmines] are few or many, the threat is the same.”

The rats undergo nine months of training, learning to sniff out the explosives in old landmines buried underground. They scratch the ground to alert their handlers to mines.

The rodents are quick learners and easy to work with, according to Alson Majanzota, leader of one of Apopo’s rat handling teams. The animals can check 200sq m of land for mines in 30 minutes; a human armed with a metal detector could take up to three days to do the same job, he adds.

Rats have also been shown to be able to detect tuberculosis, and have been trained to do so in Tanzania.