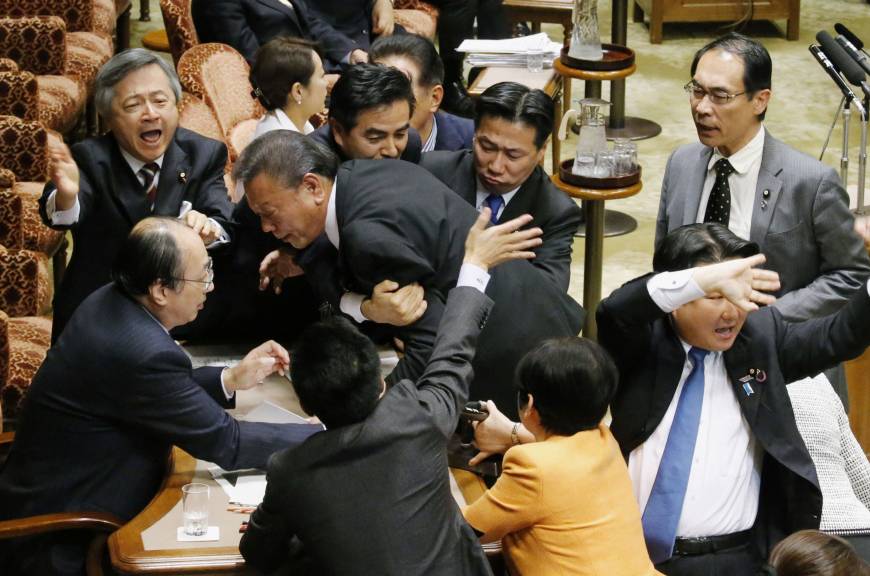 This law’s not for you: Opposition members rush Masaharu Nakagawa (seated), chairman of a House of Councilors special committee, at the Diet on Dec. 5 in an attempt to block a vote on a controversial bill to toughen penalties for leakers of state secrets. The panel later approved the bill and it was rammed through parliament the next day. | KYODO

Contentious legislation could mark the start of a dramatic shift of power to the executive, with checks and balances an afterthought

Ancient Confucian scholars regarded law as a necessary evil, something used on lower orders of people who lacked the moral refinement to act righteously without prompting. Yet this just states a basic truth about law: It is something we do to other people. You and I know how to act properly, right? It’s those awful other people who act like jerks and need their freedom restricted by rules.

Think about it: If you could be dictator for a day and pass any law, what would it be? More likely than not it would only affect other people. For example, I think people who mistreat animals are scum, so I might pass a law imposing harsh punishments on animal abuse.

Mind you, I am partial to steak frites, so I would be sure to define animal abuse in a way that doesn’t interfere with the process by which barnyard animals become conveniently sized cuts of meat. Or perhaps the best thing would be pass a law imposing veganism on everyone but myself, just in case; after all, we dictators need to keep up our strength.

Of course, in a democracy we theoretically consent to the laws that bind us. The reality, however, is that most laws first and foremost serve the goals of the people who make and execute them. This is not always clear because they generally need to at least pay lip service to notions of equality and democracy while at the same time remaking the world the way the law’s creators think it should be.

One way of understanding who a law is for is to identify who is subject to its restrictions and who is not. The latter category is probably where the folks in charge are sitting. The penchant of the U.S. Congress for exempting itself from laws it imposes on the rest of the country is a prime example.

In Japan, the Supreme Court recently rejected a constitutional challenge to a requirement that birth reports indicate if a child has been born out of wedlock. The court noted that the Japanese system of family law is founded on legal marriage, making distinctions based on marital status unavoidable. The Diet subsequently failed by a single vote to amend the law in question.

The judges did, however, eliminate a provision of the Civil Code that the court separately found unconstitutional for treating children differently for inheritance purposes based on legitimacy, though conservative parliamentarians grumbled about the destruction of the “traditional Japanese family.” No such complaining was heard when the same Diet passed laws allowing judges and other public servants to take leaves of absence to accompany working spouses posted abroad, “spouses” being defined to include partners in de facto marriages.

Family law reform for regular Japanese people? Very difficult. Hey, somebody has to keep up the traditional family.

Another example: The Ministry of Justice has a website devoted to human rights. According to it, most human-rights violations are caused by the Japanese people themselves; much of the site is devoted to awareness about various forms of discrimination, which now include prejudice against Fukushima nuclear refugees. Discrimination based on legitimacy or marital status is not mentioned, of course, but it’s not discrimination when the government does it.

In fact, missing from the site is anything about what most people typically associate with human-rights violations: those committed by government actors. The Justice Ministry also has jurisdiction over prisons, juvenile correctional facilities, the system for processing (and generally rejecting) asylum applications from people fleeing human-rights abuses elsewhere, as well as the immigration detention system in which some of those people end up. In other words, the ministry itself oversees a vast system of potential human-rights abuses. Its highly selective characterization of human-rights problems thus makes perfect sense.

But of course, the prosecutors who run the Justice Ministry already know how not to violate human rights, and perhaps nothing bad ever happens in Japanese prisons. Just to be sure, they even subject prisons and other detention facilities to oversight by third-party committees whose members are . . . er, that information is a secret.

Which brings us to Japan’s new state secrets act. Imposing draconian new punishments on public servants who leak “designated state secrets” and anyone helping them, it was rushed into law in the closing hours of the 2013 legislative calendar — during the Justice Ministry’s Human Rights Week, no less. With little opportunity for meaningful debate and ignoring fierce opposition from minority parties and broad sectors of Japanese society, the process was reminiscent of the dark old days of Liberal Democratic Party rule. “Consensus-based decision making” is supposedly a traditional Japanese value of the sort the LDP professes to respect, but apparently consensus, like law, is also best when it is imposed only on other people.

So who is this new law for? One answer might be the United States and other potential security partners. Such countries doubtless require that some sort of national secrets law be in place before they will expand defense ties with Japan, ties that may be increasingly necessary with China becoming more belligerent. That said, however, partner countries may not care about some of the specific details of the law that alarm journalists and civil libertarians.

Certainly it is not for the Japanese people: Although polls show that almost half the population agrees with the general need for such an act, it clearly wasn’t an issue in the election that brought Shinzo Abe to power. Moreover, when the government solicited public comments on the draft law, of the 90,000 comments received, 80 percent were in opposition.

Oddly, the law doesn’t seem to be for the parliament that passed it either, since it contains no exceptions for Diet members trying to do their jobs. Constitutionally, the Diet is the highest organ of state, with both chambers empowered to conduct investigations. Individual Diet members also have the ability to require Cabinet members to answer questions, a power that opposition parties use to hold the government to account.

While under the law the heads of executive agencies “may” disclose designated secrets to Diet investigatory bodies, that is not the same as Diet members being able to use information they have independently obtained — including through leaks — to launch an investigation or ask a question of a minister of state. The law thus contains no protections enabling the people’s elected representatives to work with whistle-blowers or use classified information to expose malfeasance. The law may thus prove to be part of a dramatic rebalancing of power in favor of the executive branch.

Nor does the law seem to be for the bureaucracy as a whole. Public servants are already subject to criminal sanctions for disclosing secrets. The real target of the expanded penalties in the new law is more likely anyone who might encourage or help them to do so, a category so broad that it can include foreign spies and journalists alike, with even “negligent” disclosures and “interfering with control of classified information” being punishable by imprisonment.

The ambit of what can be designated as a state secret is similarly broad, and includes information related to “terrorism,” a term that is also helpfully vague. Defined in part as “forcing political or other ideological views on a nation or other people,” “terrorism” seems to potentially include much of the majoritarian democratic process itself, though one commentator suggests the definition is missing a vital comma in Japanese that would render it much narrower in scope.

Nonetheless, remember when organizers of the 2005 Aichi Expo prohibited outside drinks — on the grounds of preventing terrorism? More disturbingly, LDP Secretary-General Shigeru Ishiba characterized noisy protests against the law as being similar to terrorism. And if you have become numb to the signs at bus stations and elsewhere saying “On special alert for terrorism!” just remember that each one reflects a context in which designation of a state secret may now be theoretically possible.

A hint of whom the law is for might be found in the provisions establishing a system of security clearances for people with access to designated secrets. However, waivers apply for Cabinet ministers and vice ministers, the heads of the executive agencies empowered to designate national secrets in the first place, a few other designated posts and a useful “TBD” category; for this elite few, a security clearance will be something that other people have to get.

From this emerges a picture of a core group of people — political bosses and elite bureaucrats — who, perhaps not individually but as a group, expect that “they” will always be in power. “They” apparently are not concerned about the prospect of becoming “other people” whose access to government information will be blocked by the law. Given the LDP’s almost uninterrupted monopoly on power and the even greater consistency of bureaucratic rule, this might be a reasonable assumption.

It would also be a frightening one. In most democratic systems the prospect of legislative weapons being turned against the people who make them often keeps even a strong majority government from aggressively tampering with the levers of power — the U.S. Senate’s long reluctance to overturn rules on filibusters being an example.

Disturbingly, some former prosecutors have warned that the problem is not so much with the secrets act itself, but with the inability to expect the criminal justice system to prevent its abuse. One of them, attorney Yoji Ochiai, notes on his blog that elite special prosecutors already use criminal statutes not just to fight crime but as a pretext for investigating — and sometimes detaining — people who “need to be investigated” because they threaten “public security.” This ability will be greatly expanded under the secrets act, concentrating even more power in the hands of prosecutors who can arrest people and detain them for up to three weeks based on the pretext of a violation.

Detention alone is enough to shatter the lives of most political troublemakers without a trial, conviction or even significant evidence; all that is required is for judges to continue rubber-stamping detention warrants. The act may thus prove to be a potent weapon against those challenging the political status quo, such as former Democratic Party of Japan boss Ichiro Ozawa, whose prosecution on a flimsy political-finance charge prevented him from becoming prime minister, a role he was expected to use to pursue an anti-bureaucrat agenda.

The assumption of perpetual rule is also suggested by the absence of any meaningful independent controls over the classification process. A “third-party” committee has been promised but would most likely be filled with carefully-selected yes men. Perhaps like prison oversight committees, its membership will also be a secret. After all, who wants to be a dictator for just one day?