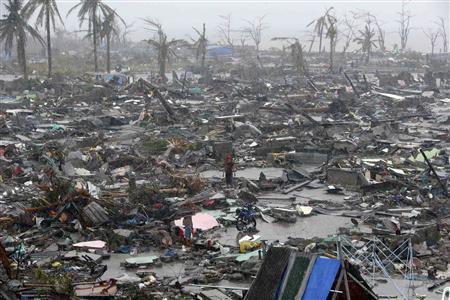 One of the most powerful storms ever recorded killed at least 10,000 people in the central Philippines, a senior police official said on Sunday, with huge waves sweeping away entire coastal villages and devastating the region’s main city.

Super typhoon Haiyan destroyed about 70 to 80 percent of the area in its path as it tore through Leyte province on Friday, said police chief superintendent Elmer Soria.

As rescue workers struggled to reach ravaged villages along the coast, where the death toll is as yet unknown, survivors foraged for food as supplies dwindled or searched for lost loved ones.

“People are walking like zombies looking for food,” said Jenny Chu, a medical student in Leyte. “It’s like a movie.”

Most of the deaths appear to have been caused by surging sea water strewn with debris that many said resembled a tsunami, leveling houses and drowning hundreds of people in one of the worst natural disasters to hit the typhoon-prone Southeast Asian nation.

The national government and disaster agency have not confirmed the latest estimate of deaths, a sharp increase from initial estimates on Saturday of at least 1,000 killed by a storm whose sustained winds reached 195 miles per hour (313 km per hour) with gusts of up to 235 mph.

“We had a meeting last night with the governor and the other officials. The governor said, based on their estimate, 10,000 died,” Soria told Reuters. “The devastation is so big.”

More than 330,900 people were displaced and 4.3 million “affected” by the typhoon in 36 provinces, the U.N.’s humanitarian agency said, as relief agencies called for food, water and tarpaulins for the homeless.

Witnesses and officials described chaotic scenes in Leyte’s capital, Tacloban, a coastal city of 220,000 about 580 km (360 miles) southeast of Manila, with hundreds of bodies piled on the sides of roads and pinned under wrecked houses.

The city lies in a cove where the seawater narrows, making it susceptible to storm surges.

The city and nearby villages as far as one kilometer (just over half a mile) from shore were flooded, leaving floating bodies and roads choked with debris from fallen trees, tangled power lines and flattened homes. TV footage showed children clinging to rooftops for their lives.

Many Internet users urged prayers and called for aid for survivors in the largely Roman Catholic nation on social media sites such as Twitter.

“From a helicopter, you can see the extent of devastation. From the shore and moving a kilometer inland, there are no structures standing. It was like a tsunami,” said Interior Secretary Manuel Roxas, who had been in Tacloban since before the typhoon struck the city.

“I don’t know how to describe what I saw. It’s horrific.”

LOOTERS TAKE WHAT THEY CAN

Mila Ward, an Australian citizen and Filipino by birth who was in Leyte on vacation visiting her family, said she saw hundreds of bodies on the streets.

“They were covered with blankets, plastic. There were children and women,” she said.

The U.N.’s Office for the Coordination of Humanitarian Affairs said aerial surveys showed “significant damage to coastal areas with heavy ships thrown to the shore, many houses destroyed and vast tracts of agricultural land decimated”.

The destruction extended well beyond Tacloban. Officials had yet to make contact with Guiuan, a town of 40,000 that was first hit by the typhoon. Baco, a city of 35,000 people in Oriental Mindoro province, was 80 percent under water, the U.N. said.

There were reports of damage across much of the Visayas, a region of eight major islands, including Leyte, Cebu and Samar.

Many tourists were stranded. “Seawater reached the second floor of the hotel,” said Nancy Chang, who was on a business trip from China in Tacloblan City and walked three hours through mud and debris for a military-led evacuation at the airport.

Six people were killed and dozens wounded during heavy winds and storms in central Vietnam as Haiyan approached the coast, state media reported, even though it had weakened substantially since hitting the Philippines.

Vietnam authorities have moved 883,000 people in 11 central provinces to safe zones, according to the government’s website. Despite weakening, the storm is likely to cause heavy rains, flooding, strong winds and mudslides as it makes its way north in the South China Sea.

Looters rampaged through several stores in Tacloban, witnesses said, taking whatever they could find as rescuers’ efforts to deliver food and water were hampered by severed roads and communications.

Mobs attacked trucks loaded with food, tents and water on Tanauan bridge in Leyte, said Philippine Red Cross chairman Richard Gordon. “These are mobsters operating out of there.”

Tecson John Lim, the Tacloban city administrator, said city officials had so far only collected 300-400 bodies, but believed the death toll in the city alone could be 10,000.

International aid agencies said relief efforts in the Philippines were stretched thin after a 7.2 magnitude quake in central Bohol province last month and displacement caused by a conflict with Muslim rebels in southern Zamboanga province.

The World Food Programme said it was airlifting 40 tons of high-energy biscuits, enough to feed 120,000 people for a day, as well as emergency supplies and telecommunications equipment.

Tacloban city airport was all but destroyed as seawaters swept through the city, shattering the glass of the airport tower, leveling the terminal and overturning nearby vehicles.

“It was like a tsunami. We escaped through the windows and I held on to a pole for about an hour as rain, seawater and wind swept through the airport,” he said. “Some of my staff survived by clinging to trees. I prayed hard all throughout until the water subsided.” 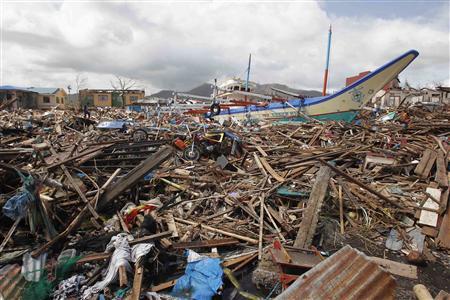 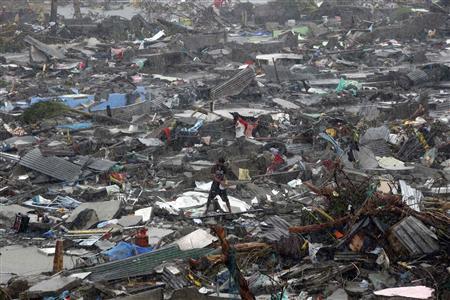 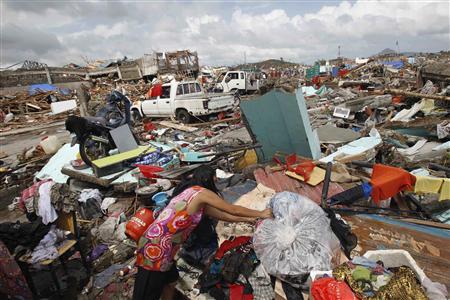 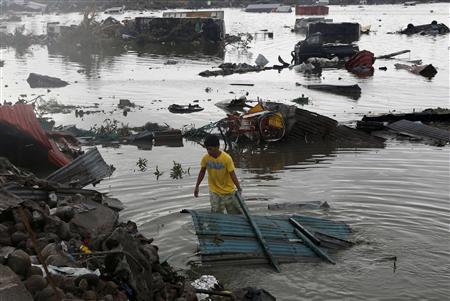 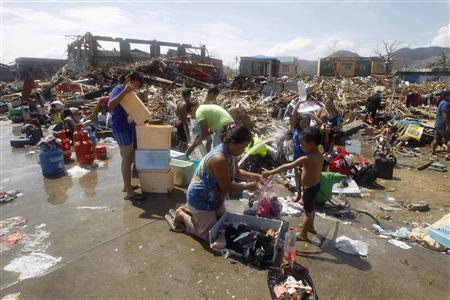 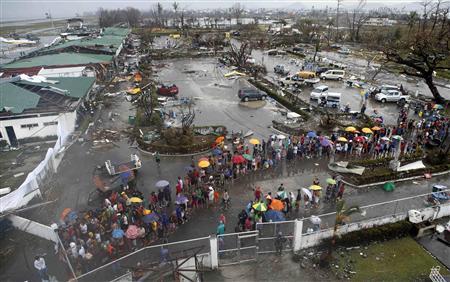 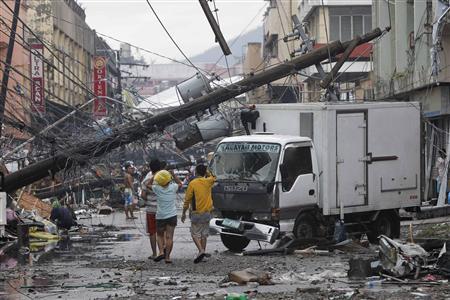 4 thoughts on “Philippine Super Typhoon Kills At Least 10,000, Survivors ‘Walk Like Zombies Looking For Food’, ‘Looters Take What They Can’ (Photos)”