Weather Channel, Oct. 18, 2013 at 9:45p ET: Super Typhoon Francisco Brushes Guam, Could Threaten Japan Next Week […] A tropical cyclone is dubbed a “super typhoon” when maximum sustained winds reach at least 150 mph – the equivalent of a Category 4 hurricane on the Saffir-Simpson scale. […] Conditions appear favorable for development [… allowing] the typhoon to strengthen in intensity, possibly to 160 mph (Category 5 status) over the next few hours. After that, Francisco will move into a region of cooler ocean temperatures, which cause the typhoon to weaken. Francisco may threaten southern Japan early next week, however the current forecast from the Joint Typhoon Warning Center indicates that the typhoon will be much weaker by that point. That said, intensity forecasts at five days out in time can be highly uncertain […] 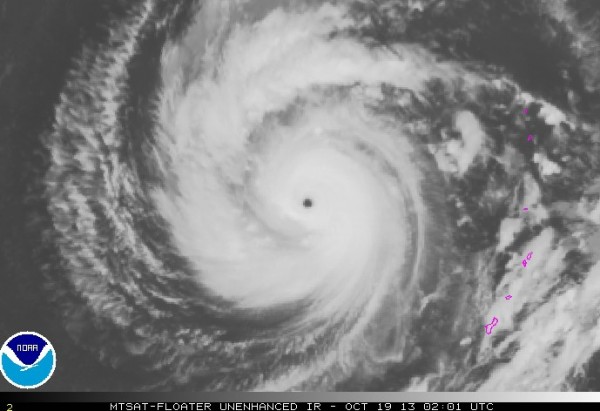 Joint Typhoon Warning Center, Oct. 19, 2013: […] as the system continues further to the north, a strong poleward outflow channel may develop which could help to offset the cooler sea SSTs and maintain higher intensities. […] All objective aids, with the exception of GFDN, are beginning to  indicate a recurve scenario, but widely vary in position and track speed of the system. […]

Accuweather, Oct. 18, 2013: Francisco gained strength late Friday afternoon and was classified as a Super Typhoon by the Joint Typhoon Warning Center, which estimated one minute average sustained winds of 135 knots (155 mph) with gusts to 165 knots (190 mph). This would classify Franciso as a Category 4 hurricane on the Saffir-Simpson Scale. As strong as Francisco currently is, continued strengthening is expected over the next 24-48 hours […] The typhoon is likely to threaten western Japan by the middle of next week. Francisco has developed in a similar area to where former Typhoon Wipha formed last week. 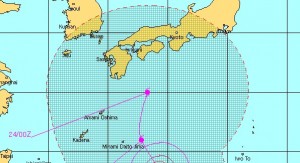 Washington Post, Oct. 18, 2013: Double whammy drenching in Japan? Super typhoon Francisco may follow Wipha’s path […] Just one week following a deadly dousing from Typhoon Wipha, a second typhoon could deluge Japan.  […] Long-term track guidance takes super typhoon Francisco on a course generally towards Japan, with another round of rain and wind possible some time between Wednesday and Friday next week. […] Its current satellite presentation exhibits the traits of an extremely powerful cyclone, with a well-defined eye  […] Wednesday, around the time Francisco may be approaching Japan, peak winds are expected to have decreased to 80-85 mph. Still, should even a much weakened Francisco make a direct hit on Japan, it would likely bring a second round of torrential rain […] At the Fukushima nuclear plant, the level of radioactivity spiked after heavy rains may have lifted contaminated soil […]