I admit that when I saw today’s breaking news on InfoWars.com about Chase Bank limiting cash withdrawals and banning international wire transfers, I was skeptical. Many readers didn’t believe it, either. So just to check it out, I called my own accounting team to ask if we had received a similar letter from Chase, announcing that no international wire transfers would be allowed after Nov. 17th.

Sure enough, we were sent the same letter! I’ve posted a JPG image of the letter below so you can read it for yourself.

Or Click here to see the hi-res scan of this letter. This is the letter that we received directly from Chase. This is not secondhand information.

• All international wire transfers will be disallowed.

• All cash activity, including cash withdrawals and deposits, will be halted at “$50,000 per statement cycle.” How are businesses who deal with a lot of cash (such as restaurants) supposed to function under such restrictions?

We called and spoke with Chase Bank to ask why these capital controls were being implemented on November 17th.

Their response was that these changes were being implemented “to better serve our customers.” They did not explain how blocking all international wire transfers would “better serve” their customers, however.

Chase Bank specifically denied any knowledge of problems with cash on hand, or government debt or any such issue. They basically downplayed the entire issue and had no answers for why capital controls were suddenly being put into place.

Dropping the hammer on capital controls

This is the beginning of the capital controls we’ve been warning about for years. Throughout history, when governments are on the brink of financial default, they begin limiting capital controls in exactly the way we are seeing here.

Finally, the last act of desperation by governments facing financial default is to seize private funds from banks, Cyprus-style. The precedent for this has already been set in Cyprus, and when that happened, I was among many who openly predicted it would spread to the United States.

This is happening, folks! The capital controls begin on November 17th. The bank runs may follow soon thereafter. Chase Bank is now admitting that you cannot use your own money that you’ve deposited there.

This is clearly stemming from a government policy that is requiring banks to prevent cash from leaving the United States. Such policies are only put into place when a huge financial default event is expected.

More updates to follow. Stay tuned to Natural News for intelligent analysis of why this is happening. We are already receiving word that this may have something to do with the “Dodd-Frank Wall Street Reform and Consumer Protection Act” and we are looking into it further.

Here’s the letter we received: 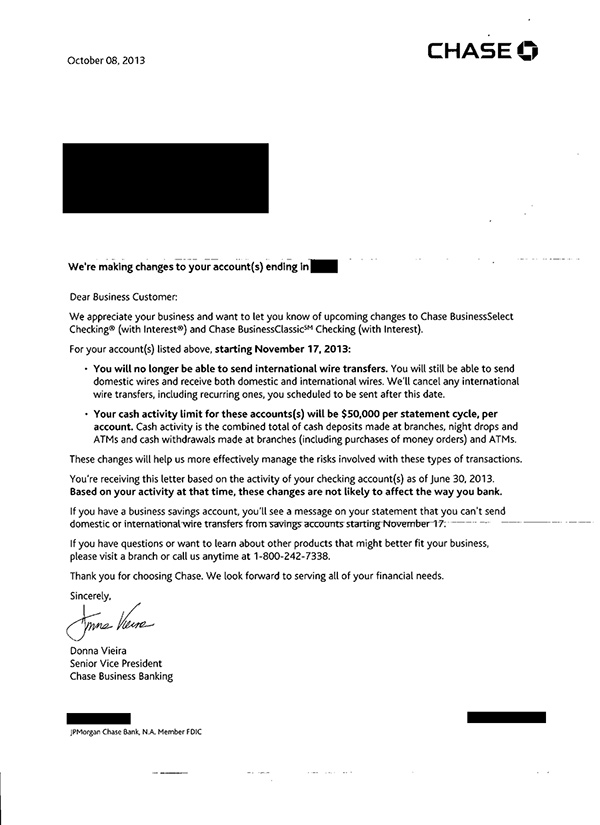