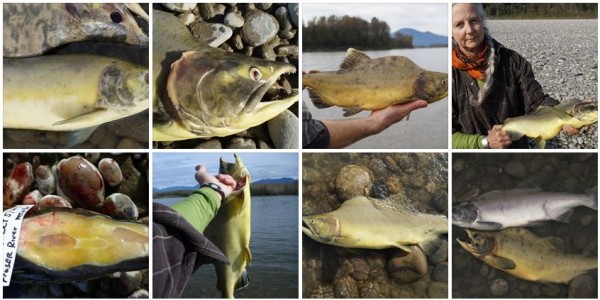 Alexandra Morton’s Blog, Oct. 11, 2013: […] The sockeye returns to the Skeena watershed in northern British Columbia crashed this year. This was completely unexpected. Sockeye salmon returns have plunged to historic lows in the Skeena River system of northwestern British Columbia, forcing drastic, never-before-imposed fishing closures. […] massive numbers were dying before spawning. This is a Fraser sockeye problem. This is called prespawn mortality (PSM). […] Now, the Skeena sockeye appear to be exhibiting a similar characteristic. […] On the first day we came across a First Nation fishery and found pink salmon that were a deep, canary yellow […] parts of their hearts are yellow, their gill arches and spines are yellow, the cartilage in their head is yellow. Their spleens are swollen and enlarged, and their livers are spotted. In some cases their eyes were bugged out. Guys who have fished this region their whole lives told me they have seen the occasional yellow salmon over the years, but never in the numbers seen this year. […]

Alexandra Morton’s Facebook Page, Oct. 5, 2013: Because so many people have asked me about radiation I bought a gieger counter and took it to the river today – all the readings indicated normal background levels. I am no expert on this and so I am only reporting on what the equipment reported.

Chilliwack Progress, Oct. 18, 2011: Yellow-tinged salmon carcasses showing up in local rivers this fall are raising red flags. Longtime Chilliwack angler Chris Gadsden said he was shocked to find a yellow coloured chinook salmon recently in the Vedder Canal. “I’d never seen one like that before, in my 30 plus years of fishing the Vedder,” he said. He was so concerned, he sent some samples to DFO by Greyhound bus for analysis. […] Gadsden said he started asking questions after hearing that Morton had been in the Fraser Valley recently looking into reports of pre-spawn mortality of sockeye and coho in Fraser River tributaries feeding into the Harrison River. Dr. Morton reported on the yellow salmon she found on Oct 5. […] “On my trip up the Fraser River two days ago I also found four yellow pink salmon. Even the cartilage inside the fish’s head was yellow. […] “We want the diagnosis on the yellow salmon. We want to know if we a getting a side order of brain tumour in the salmon we are eating,” Morton added.