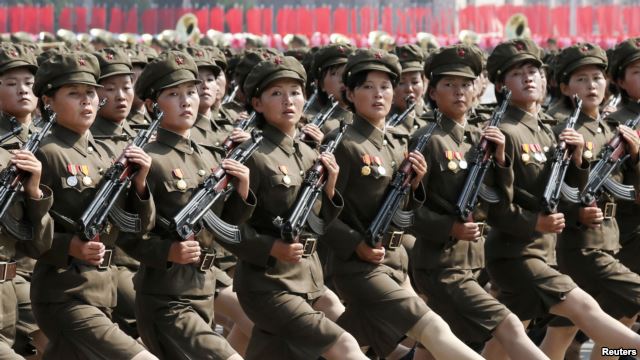 North Korea has placed its military on alert and warned of “disastrous consequences” in response to a planned U.S.-led military drill near the Korean peninsula.

A North Korean military spokesman told state media all troops have been ordered to “keep themselves ready to promptly launch operations at any time.”

“Our armed forces are closely monitoring the North Korean military’s movements and are fully prepared to take a decisive action against the North’s possible provocations,” he said.

Pyongyang’s official Korean Central News Agency (KCNA) published a report claiming the ship was carrying “at least 100 nuclear bombs aboard.” It said the closer U.S. forces get to North Korea, “the more unpredictable disasters their actions will cause.”

Pyongyang often threatens military action in response to the U.S.-South Korean drills, but rarely follows through.

The three-day trilateral exercise off Busan was due to start on Tuesday but was postponed due to the passage of a typhoon through the region. No new date was announced.

A South Korean officer quoted by Yonhap said the USS George Washington is on standby after moving from Busan to a safer area to ride out the typhoon.

Leonid Petrov, a Korea analyst at the Australian National University, tells VOA he views the North Korean threats as part of a “seasonal type” of escalation.

“Every time the United States’ and the Republic of Korea’s naval or aerial exercises take place on the southern side of the peninsula, the North Koreans take it very seriously,” said Petrov.

Petrov says North Korea views the drills as preparation to invade, a sentiment he says reflects the ongoing tension surrounding the Korean War.

“The Korean War is technically still going on, and every time the military on one side or the other is beefing up its forward deployed military, the other side reacts and sometimes overreacts,” he said.

The North’s war-like rhetoric reached a peak not seen in years following international condemnation of its nuclear weapon test in February. At its worst point, North Korea was issuing near-daily threats of nuclear war against the U.S. and its regional allies.

Relations had recently shown signs of improvement, with the two Koreas reaching tentative agreements on resuming a series of cross-border projects, including a symbolic joint factory that had served as a bellwether of Korean ties.

But the KCNA article warned that “the situation on the Korean peninsula is getting strained again.” It said this is “entirely attributable” to what it called the “persistent anti-DPRK military confrontation of the U.S. and Japanese aggressors and South Korean puppet forces.”

South Korean lawmakers say North Korea also appears to have taken a step toward restarting its nuclear weapons program. The lawmakers said South Korea’s National Intelligence Service told them in a closed briefing that the North recently restarted its plutonium reactor at Yongbyon.

North Korea threatened to restart the aging reactor in April but has not confirmed such a move. The reactor could be used to produce nuclear weapons.

Pyongyang had shut down the reactor as part of six-party negotiations on dismantling its nuclear weapons program in return for aid. Those talks have been stalled for years.