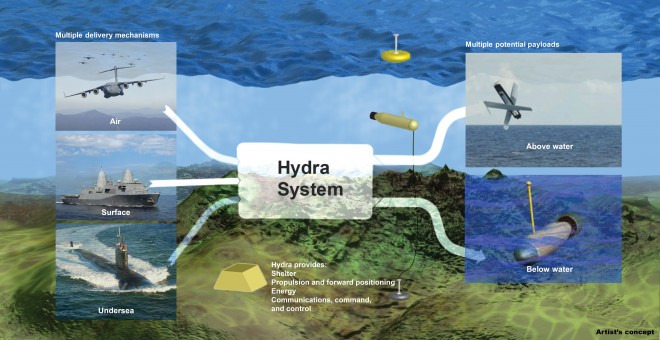 DARPA, the Pentagon’s research agency, has recently revealed its plans to boost the Navy’s response to threats in international waters by developing submerged unmanned platforms that can be deployed at a moment’s notice.

Hydra, named after the serpent-like creature with many heads in Greek mythology, would create an undersea network of unmanned payloads and platforms to increase the capability and speed the response to threats like piracy, the rising number of ungoverned states, and sophisticated defenses at a time when the Pentagon is forced to make budget cuts. According to DARPA, the Hydra system ”represents a cost effective way to add undersea capacity that can be tailored to support each mission” that would still allow the Navy to conduct special operations and contingency missions. In other words, the decreasing number of naval vessels can only be in one place at a time.

“The climate of budget austerity runs up against an uncertain security environment that includes natural disasters, piracy, ungoverned states, and the proliferation of sophisticated defense technologies,” said Scott Littlefield, DARPA program manager, in a statement. “An unmanned technology infrastructure staged below the oceans’ surface could relieve some of that resource strain and expand military capabilities in this increasingly challenging space.”

The Hydra system is intended to be delivered in international waters by ships, submarines or aircraft with the integrative capability of communicating with manned and unmanned platforms for air, surface, and water operations.

Unlike the Upward Falling Payloads (UFPs) program DARPA announced in January that would submerge massive waterproof containers intended to store weapons, drones and supplies for years at a time, Hydra is a highly mobile platform that can be deployed for a few weeks or months in relatively shallow international waters.

“By separating capabilities from the platforms that deliver them, Hydra would enable naval forces to deliver those capabilities much faster and more cost-effectively wherever needed,” said Littlefield. “It is envisioned to work across air, underwater, and surface operations, enabling all three to perform their missions better.”

Proposals are due October 22, but it may well 2018 before Hydra lands in the ocean.