With a government’s October 1 shut down – temporary of course – now seemingly inevitable, and more importantly with the peak debt ceiling negotiations due in just about a week after which point the Treasury will run out of money, many wonder what comes next. That this is happening just two short years after the dramatic August 2011 debt ceiling impasse, when the market tumbled 20% and likely slowed economic growth is still fresh in everyone’s mind, is hardly helping matters. Add a potential political crisis in Greece and Italy, and suddenly a whole lot of unexpected variables have to be “priced in.”

Courtesy of AP, here are questions and answers about how the two standoffs, now intertwined, could affect the economy and financial markets:

Q. What exactly will happen within the next days and weeks?

Q. What would be the effect on the economy if the two sides miss the deadline for passing the spending measure?

A. About one-third of the government will shut down. About 800,000 of about 2.1 million federal employees will be sent home without pay. National parks will close.

NASA will continue to keep workers at Mission Control in Houston and elsewhere to support the International Space station, where two Americans and four other people live. Aside from that only about 3 percent of NASA’s 18,000 workers will keep working.

The military and other agencies involving safety and security would continue to function. These include air traffic controllers, border patrol and law enforcement officers. Social Security, Medicare and veterans’ benefits payments would continue, but there could be delays in processing new disability applications.

A partial shutdown that lasts no more than a few days wouldn’t likely nick the economy much. But if the shutdown were to persist for two weeks or more, the economy would likely begin to slow, economists say.

Extended closures of national parks would hurt hotels, restaurants and other tourism-related businesses. Delays in processing visas for overseas visitors could interrupt trade. And the one-third of the federal workforce that lost pay would cut back on spending, thereby slowing growth.

A three-week shutdown would slow the economy’s annual growth rate in the October-December quarter by up to 0.9 percentage point, Goldman Sachs estimates. If so, the growth rate next quarter would be a scant 1.6 percent, compared with the 2.5 percent that many economists now forecast.

The contingency plans for various government agencies are available at http://www.whitehouse.gov/omb/contingency-plans .

Q. What about the federal borrowing cap? First of all, what is it?

A. It’s a legal limit on how much debt the government can pile up. The government accumulates debt two ways: It borrows money from investors by issuing Treasurys. And it borrows from itself, mostly from Social Security revenue.

Q. What if Congress can’t agree to raise the cap in time?

A. It could be disastrous. No longer authorized to borrow, the government would have to pay its bills only out of the revenue it gets from taxes and fees. This would force the government to immediately slash spending by 32 percent, the Bipartisan Policy Center estimates. Most analysts think the government would delay paying each day’s bills until it had accumulated enough money to pay them all.

Even worse, the government could miss interest payments on Treasurys, triggering a first-ever default by the U.S. government. U.S. Treasurys are held by banks, governments and individuals worldwide. Ultimately, a prolonged default could lead to a global financial crisis.

At the same time, Social Security and other benefit payments would be delayed. Government contractors might not be paid and would likely lay off workers. Paychecks for military personnel could be delayed.

The government actually reached its borrowing limit back in May. Since then, the Treasury has taken a variety of measures to avoid exceeding it. But the cash generated by those measures will run out sometime between Oct. 22 and Oct. 31, the nonpartisan Congressional Budget Office estimates.

The date isn’t exact because it isn’t possible to foresee precisely how much revenue the government will receive and when.

Q. Will the economy escape harm if both deadlines are met?

A. Probably. But even brinksmanship can have consequences. The last major fight over the borrowing cap, in the summer of 2011, wasn’t resolved until hours before the deadline. Even though the deadline was met, Standard & Poor’s issued the first-ever downgrade of long-term U.S. credit. That, in turn, led to a 635-point plunge in the Dow Jones industrial average the next day.

In August that year, consumer confidence plummeted to its lowest level since April 2009, when the economy was in recession. Spending at retail stores weakened.

The International Monetary Fund estimated last month that U.S. budget disputes, like the 2011 showdown, can slow annual growth by up to 0.5 percentage point in other parts of the world.

The Government Accountability Office later estimated that just the threat of default escalated the government’s borrowing costs that year by $1.3 billion, or about 0.5 percent.

The drawn-out fights can cause Americans to delay major purchases, such as for cars or appliances, says Ethan Harris, global economist at Bank of America Merrill Lynch. And they can erode confidence in the United States as a place to do business. Employers become less willing to expand and hire.

On Friday, the U.S. Chamber of Commerce, the National Association of Manufacturers and several other business groups urged Congress to fund the government and raise the borrowing limit.

“It is not in the best interest of the employers, employees or the American people to risk a government shutdown that will be economically disruptive and create even more uncertainties for the U.S. economy,” the groups said.

A. Stock prices have fallen in six of the past seven days, partly because of the looming deadlines. But the price declines have been modest. Many investors likely feel they have seen this movie before and know how it ends: with another last-minute deal.

“After several rounds of fiscal brinksmanship … markets may be somewhat desensitized to the headlines,” Alec Phillips, an economist at Goldman Sachs, wrote in a note to clients.

And for those government workers curious if they will or won’t be working on Tuesday in case of a shutdown, the following primer from the NYT answers that question: 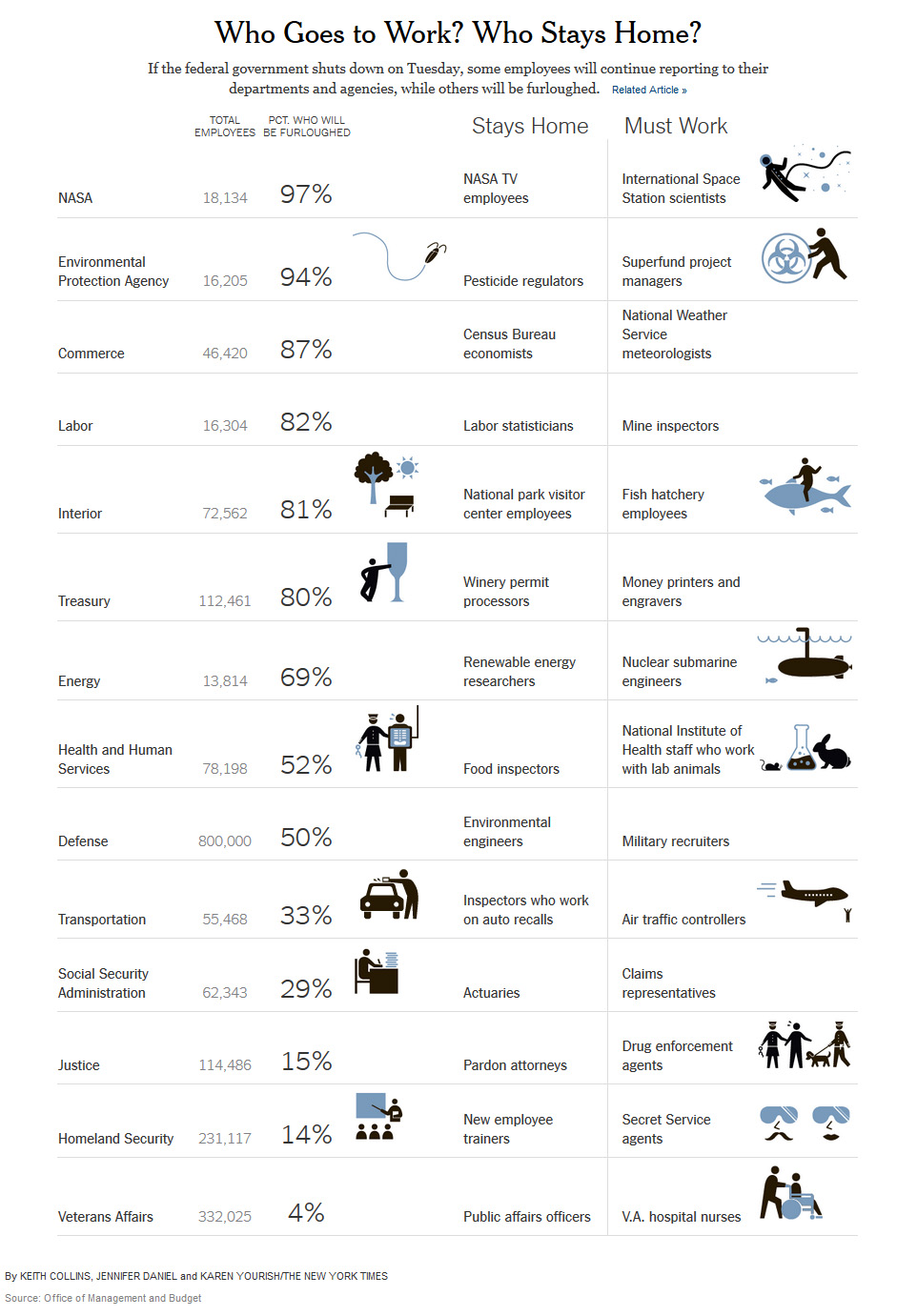 2 thoughts on “U.S. Government Shutdown Looms: A Q&A On What Happens Next (And Who Stays At Home)”