It was unclear if the Defense Department or HP had been aware of Alexis’ brushes with the law, which reportedly included two shooting incidents, before he was hired for the IT work.

Military officers said Alexis had a pattern of “misconduct” during his four-year service as a naval reservist.

And speaking of his prior transgressions:

Alexis was arrested for a 2004 incident that involved a Glock .45-caliber pistol. According to the police report, Alexis used the gun to shoot out someone’s car tires during a dispute. His father reported Alexis had anger management issues and post-traumatic stress disorder because he was a rescuer in New York on September 11, 2001.

It is not known whether that is true, if Alexis actually did work as a rescuer on 9/11, although there were volunteers on hand at Ground Zero in New York City. On Monday night, federal agents are interviewing Alexis’ parents and sister at their home in Brooklyn.

Alexis went through training at north suburban Great Lakes in 2007. The motive and whether there are accomplices are still mysteries on Monday afternoon, but eight hours after shots were fired on the Navy Yard in Washington, it is clear what happened. There was fear, bloodshed and chaos in a place where it was totally unexpected.

Still, one thing missing from the file of the deceased person below, at least for now, is motive if any. We are confident one will emerge, as soon as it is politically suitable. 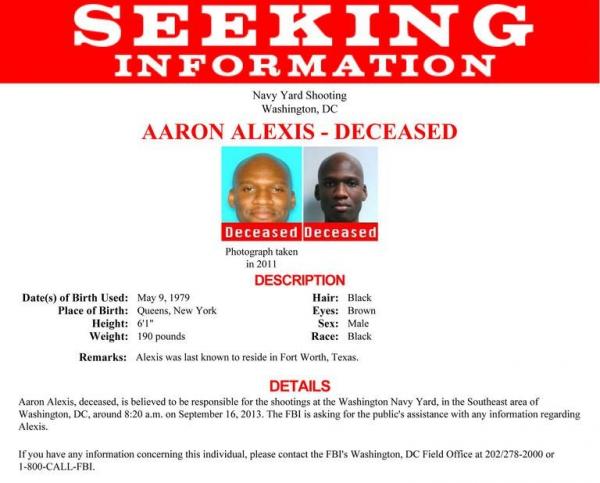