In the aftermath of the Cyprus bail in (and to a lesser extent the Polish pension fund debacle), it is understandable if depositors are a little sensitive about the insurance, and thus confiscability (sic), of their deposits. Starting today, following a 5-0 vote by the FDIC, depositors in foreign US bank branches will officially no longer have recourse to a $250,000 in deposit insurance. The notional amount of deposits at risk: $1 trillion. This is not a new development: the FDIC rule to curb insurance on this category of deposits was proposed earlier this year, and today was the formalization. However, questions do arise: if a major US depository institution does fail domestically, the financial state of their depositors abroad will hardly be the biggest issue.

The move rejects what officials called a “creative” legal proposal from the banking industry. “We don’t want to become the deposit insurer for the world,” FDIC officials said at a briefing.

The FDIC’s action was prompted by the move last year by U.K. regulators to propose changes in the way deposits held at overseas branches should be treated. FDIC officials said the U.K. proposal potentially opened the door to those deposits being insured by the FDIC; the rule being finalized Tuesday clarified that isn’t the case, said FDIC Chairman Martin Gruenberg.

“The final rule protects the deposit insurance fund, while at the same time recognizing both the FDIC’s commitment to maintaining financial stability through the prompt payment of deposit insurance and the evolving nature of the global banking system,” Mr. Gruenberg said in a statement.

Naturally, the whole point is to generate the “risky” impetus for foreign depositors to pull their money out of the “safety” of deposit accounts and buy risky assets, a trend which started with Cyprus but will certainly not end there.

However, a different question emerges: if the US offshore bank branches will no longer be insured by the US, the logical implication is that deposits of foreign banks in the US are not insured either. Of course, the good thing about deposits held by foreign banks in the US are mostly Fed excess reserve derived, as the following chart shows, which once again shows that of the $2.4 trillion in deposits in all US commercial banks, a majority, or $1.25 trillion belongs to foreign banks operating in the US. It also whos the total amount of Fed reserves in the system. The fact that the two are identical is not a coincidence. 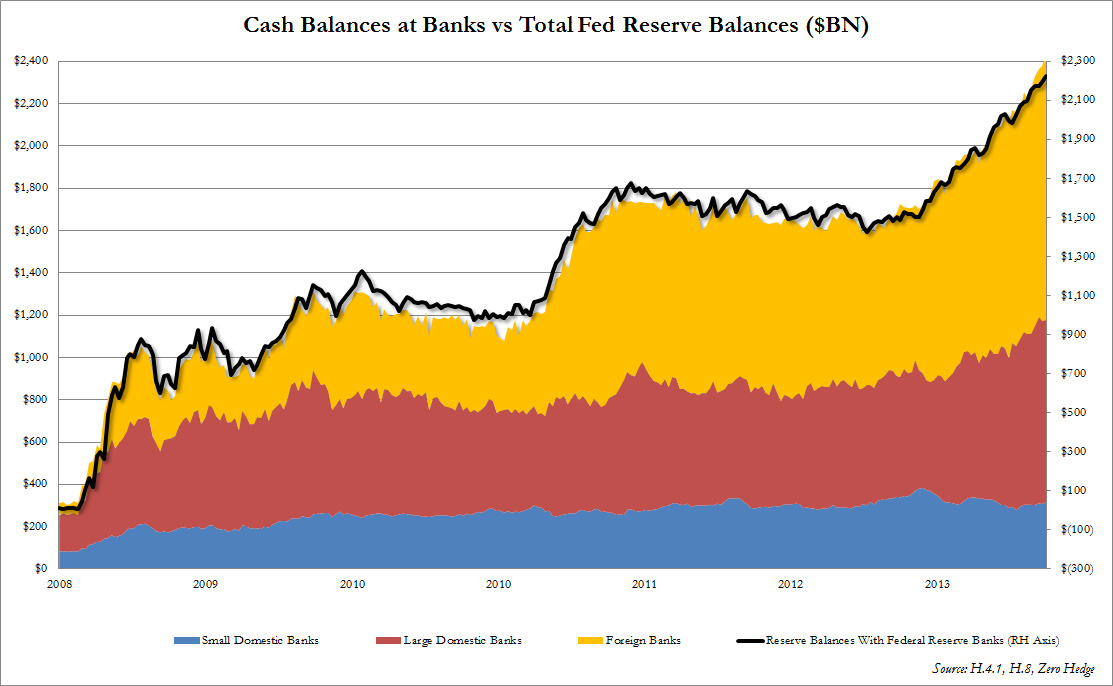