If true, China and especially Russia will not be ‘amused’.

The ‘response team’ is ready:

We have yet to see secondary confirmation of the following breaking news from the second largest French newspaper, Le Figaro, but if accurate, it means the Nobel Peace Prize winning president has just engaged in yet another unsanctioned by Congress war.

According to our information, the regime’s opponents, supervised by Jordanian, Israeli and American commandos moving towards Damascus since mid-August. This attack could explain the possible use of the Syrian president to chemical weapons.

According to information obtained by Le Figaro , the first trained in guerrilla warfare by the Americans in Jordan Syrian troops reportedly entered into action since mid-August in southern Syria, in the region of Deraa. A first group of 300 men, probably supported by Israeli and Jordanian commandos, as well as men of the CIA, had crossed the border on August 17. A second would have joined the 19. According to military sources, the Americans, who do not want to put troops on the Syrian soil or arming rebels in part controlled by radical Islamists form quietly for several months in a training camp set up at the border Jordanian- Syrian fighters ASL, the Free Syrian Army, handpicked.

According to this expert on the region, the idea proposed by Washington would be the possible establishment of a buffer zone from the south of Syria, or even a no-fly zone, which would cause opponents safely until the balance of power changes. This is the reason why the United States has deployed Patriot batteries and F16 in late June Jordan.

Why is the US, or rather Federal Reserve, desperate for a war with Syria?  It was all explained previously here, but here is the one chart that matters. 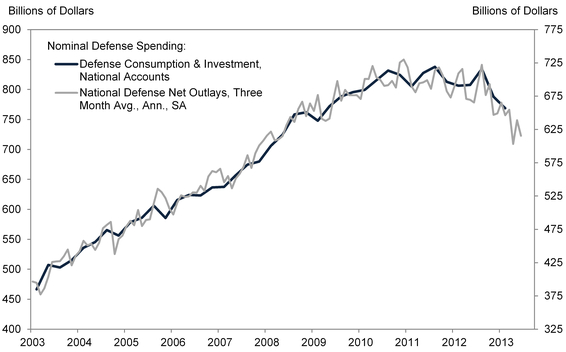 In brief: to allow the Untaper once the Taper ends, the US needs to find much more deficit funding needs, and as always there is no place better to achieve this than to spike the contracting spending budget by engaging in war.

And now, the ball is in Putin’s court.