Remember when housing was the primary aspirational asset for a still existent US middle class, to be purchased with some equity down by your average 30 year-old hoping to start a family in his or her brand new home, and, as the name implies, aspire to reach the American dream? Those days are long gone. Back in those days the interest rate on the 10 Year bond mattered as it determined the prevailing marginal affordability of leveraged real estate. That is no longer the case, at least not for about 90% of Americans, because as Goldman shows, while before the great crisis only 20% of home purchases were “all cash”, since then the number has soared threefold, and currently the estimated percentage of cash transactions (by count and amount) has hit a record 60%. In other words, less than half of all home purchases are debt-funded, and thus less than half of all home purchases are actually representative of what middle-class America is doing. 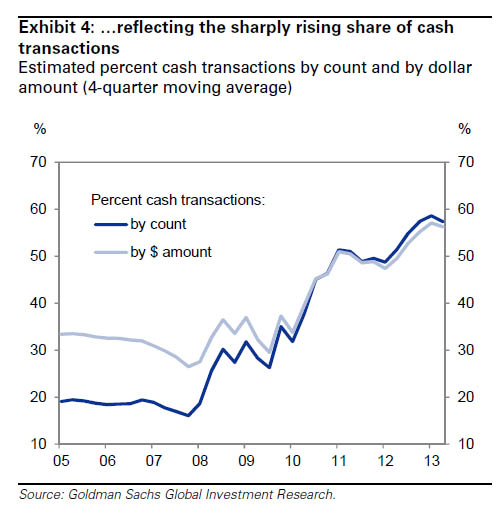 Exhibit 4 shows the estimated cash transactions as percent of total home sales both by transaction count and by transaction dollar amount. Relative to the pre-crisis years, percent cash transactions has risen by about 30 percentage points. This change is broadly in  line with the increases suggested by DataQuick data. The 30 percentage point increase in percent cash transactions explains almost the entire decline in the “mortgage per dollar transaction” series (with the remainder explained by small changes in average LTV ratios per mortgage). We do not have data to assess who these all-cash homebuyers are, but presumably investors who have been purchasing distressed properties and turning them into rental units have played an important role.

The WSJ has a few thoughts to add:

The surprisingly large cash-share of purchases helps to explain why home sales have jumped over the past two years despite more muted increases in broad measures of new mortgage activity, such as the MBA’s mortgage application index.

There’s no exact way to know who is responsible for all of these cash purchases, though they are likely to include some combination of investors, foreign buyers, and wealthy homeowners that don’t want to go through the hassle of getting a mortgage before closing on a sale. Mortgage lending standards have sharply tightened up since the housing bubble, with banks scrutinizing borrowers’ tax returns and bank statements to verify their incomes and the source of their down payment.

Our personal thoughts: just like the stock market has been levitating on zero volume and virtually no broad distribution, so the entire housing market appears to have morphed into a “flip that house” investment vehicle used by the usual suspects (wealthy foreign oligarchs abusing the NAR’s anti-money laundering exemption to park their stolen funds in the US, government sponsored firms such as BlackStone using near zero cost REO-to-Rent subsidies, and other 0.01%-ers) who piggyback on cash flows deriving from alternative cheap credit-funded investments and translate their profits into real-estate investments.

It also means that if nobody used leverage (i.e., mortgages) to buy houses before, they certainly won’t do it now, all the more so with interest rates soaring and purchase affordability imploding in front of everybody’s eyes.

Finally, due to the very thin marginal source of bidside interest (flipper flipping to flipper and so on), it means that most of America has not participated in this mirage “recovery”, and all it will take to send the buoyant housing market crashing is for the one marginal buyer to become a seller. What they will next find, is that when dealing with a bidside orderbook that has zero depth, one indeed takes the escalator down from where the lofty heights achieved courtesy of Fed-funded stairs.