Raw garlic does not only help to prevent cancer, it also helps to cure it and it is part of many successful cancer therapies.

Here is one of them, the Gerson therapy:

(All these videos are highly recommended!!!) 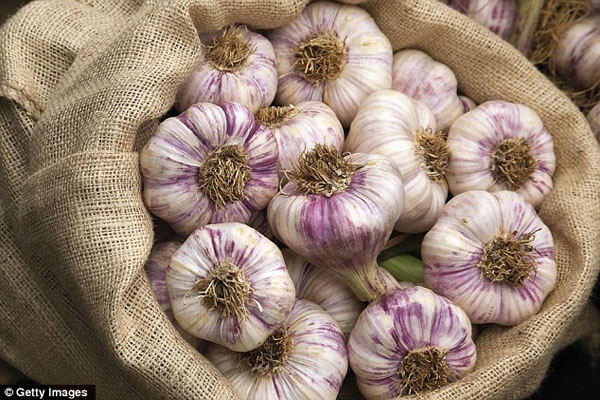 Eating raw garlic twice a week can cut the chances of lung cancer by almost half, new research suggests.

The results, published online Wednesday in the journal Cancer Prevention Research, showed those who ate raw garlic at least twice a week cut the risk of lung cancer by 44 per cent, even if they were exposed to high-temperature cooking-oil fumes, which is thought to be another trigger for the disease.

The herb even reduces the risk in smokers by 30 per cent, the research suggested.

Scientists at the Jiangsu Provincial Centre for Disease Control and Prevention carried out face-to-face interviews with 1,424 lung cancer patients with 4,500 healthy adults in China from 2003 to 2010.

Each one was questioned on their dietary and lifestyle habits, including how often they consumed garlic and whether they smoked.

The key ingredient appears to be a chemical called allicin, released when the clove is crushed or chopped. Allicin is believed to reduce inflammation in the body and act as an antioxidant, reducing damage from so-called free radicals to the body’s cells.

It’s not clear whether cooked garlic has the same effect.

In a report on their findings the researchers said: “Garlic may potentially serve as a preventive agent for lung cancer.”

According to Lung Cancer Canada, the disease remains the most contracted form of cancer in Canada, with one in 12 Canadians developing lung cancer during his or her lifetime.

Smoking is the most common cause of lung cancer.