Indian philanthropist and cardiac surgeon, Devi Prasad Shetty is obsessed with making heart surgery affordable for millions of Indians. As Bloomberg notes, Shetty is not a public health official motivated by charity. He’s a heart surgeon turned businessman who has started a chain of 21 medical centers around India. By trimming costs, he has cut the price of artery-clearing coronary bypass surgery to 95,000 rupees ($1,583), half of what it was 20 years ago, and wants to get the price down to $800 within a decade. The same procedure costs $106,385 at Ohio’s Cleveland Clinic. Of course, this will come as no surprise after we showed the incredible spread of the price of an appendectomy. “It shows that costs can be substantially contained,” notes the World Heart Federation, “it’s possible to deliver very high quality cardiac care at a relatively low cost.” But, for Americans of course, when you have government footing the cost (and deficit spending), who cares? 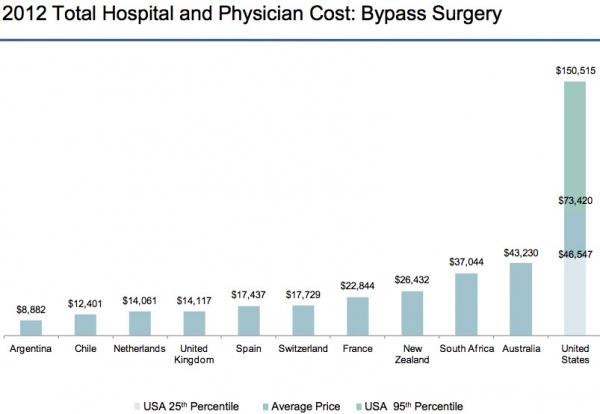 Medical experts like Reddy are watching closely, eager to see if Shetty’s driven cost-cutting can point the way for hospitals to boost revenue on a wider scale by making life-saving heart operations more accessible to potentially millions of people in India and other developing countries.

“The current price of everything that you see in health care is predominantly opportunistic pricing and the outcome of inefficiency,” Shetty, 60, said in an interview in his office in Bangalore, where he started his chain of hospitals, with the opening of his flagship center, Narayana Hrudayalaya Health City, in 2001.

In the future, Shetty sees costs coming down further as more Asian electronics companies enter the market for CT scanners, MRIs and catheterization labs — bringing down prices. As India trains more diploma holders in specialties such as anesthesiology, gynecology, ophthalmology and radiology, Narayana will be able to hire from a larger, less expensive talent pool.

One positive unforeseen outcome may be that many of the cost-saving approaches could be duplicated in developed economies, especially in the U.S. under health reform.

“Global health-care costs are rising rapidly and as countries move toward universal health coverage, they will have to face the challenge of providing health care at a fairly affordable cost,” said the World Heart Federation’s Reddy, a New Delhi-based cardiologist who is also president of the Public Health Foundation of India.