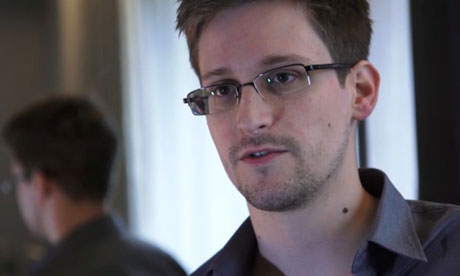 Edward Snowden, who has said he might seek asylum in a country with ‘shared values’, such as Iceland. Photograph: The Guardian/AFP/Getty Images

Russia has offered to consider an asylum request from the US whistleblower Edward Snowden, in the Kremlin’s latest move to woo critics of the west.

Snowden fled the United States before leaking the details of a top-secret US surveillance programme to the Guardian this month. He is currently believed to be in Hong Kong, but has reportedly changed hotels to keep his location secret.

Fearing US retaliation, Snowden said at the weekend that “my predisposition is to seek asylum in a country with shared values“, citing Iceland as an example. He defended his decision to flee to Hong Kong by citing its relative freedom compared with mainland China.

Snowden is not known to have made any asylum requests, including to Russia. Yet speaking to the Russian newspaper Kommersant, Dmitry Peskov, Vladimir Putin’s spokesman, said: “If such an appeal is given, it will be considered. We’ll act according to facts.”

Peskov’s comments were widely carried by the Russian media, which have largely ignored Snowden’s revelations that the National Security Agency (NSA) was secretly empowered with wide-reaching authority to collect information from the US mobile provider Verizon and to snoop on emails and internet communications via a data-mining programme called Prism. Russia’s feared security services are widely believed to maintain similar powers.

Peskov’s comments on potential asylum opened the floodgates on support for Snowden. Robert Shlegel, an influential MP with the ruling United Russia party, said: “That would be a good idea.”

Alexey Pushkov, head of the Duma’s international affairs committee and a vocal US critic, said on Twitter: “By promising asylum to Snowden, Moscow has taken upon itself the protection of those persecuted for political reasons. There will be hysterics in the US. They only recognise this right for themselves.”

He continued: “Listening to telephones and tracking the internet, the US special services broke the laws of their country. In this case, Snowden, like Assange, is a human rights activist.”

Russia has a roundly poor reputation for human rights and freedom of speech, with people regularly persecuted for their political beliefs. Dozens have been arrested for protesting against Putin, and the president’s top critics continue to face the decision of whether to flee the country or end up in jail.

The country’s own whistleblowers suffer harrowing fates. Sergei Magnitsky, a lawyer who revealed a multimillion-dollar corruption scheme involving officials from the interior ministry and tax police, was arrested and later died in jail after being refused medical attention. His body also showed signs of torture. Alexey Navalny, a prominent anti-corruption activist, is currently on trial on charges widely believed to be politically motivated.

Yet Russia is often among the first countries to offer support for whistleblowers who expose wrongdoing in the west. Julian Assange, the head of WikiLeaks, found many a champion among Russian officials and was given a programme on Russia Today, the Kremlin’s English-language propaganda television channel.

Putin has made a concerted effort to woo those who forsake the west. This year, he loudly welcomed Gérard Depardieu after the French actor declared his desire to renounce his citizenship in protest at France’s high tax rate. Putin granted the actor Russian citizenship and other Russian officials have given him flats around the country, including in Grozny, the postwar capital of Chechnya.