“(Camp) Lejeune ignored reports from the Army and an independent contractor that its base wells were contaminated with organic solvents. As many as one million Marines, dependents and civilian workers were exposed to toxic chemicals at Lejeune.” 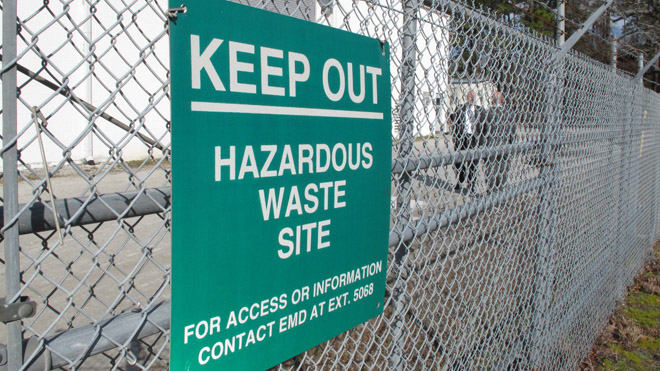 ADVANCE FOR USE SUNDAY, MAY 19, 2013 AND THEREAFTER – A sign cautions visitors outside a “pump and treat” facility on the Marine base at Camp Lejeune, N.C., on Wednesday, Feb. 27, 2013. The sprawling installation is the site of one of the worst drinking water contaminations in U.S. history. (AP Photo/Allen Breed)

As early as 1963, the Navy’s Bureau of Medicine and Surgery issued “The Manual of Naval Preventive Medicine.” Chapter 5 is titled “Water Supply Ashore.” The Navy Manual required Lejeune (and other Navy and Marine Corps bases like El Toro) to use the carbon chloroform extract (CCE) test to check the quality of water for base wells.

The CCE test measures the organic content of water by adsorbing the organic matter onto activated carbon – then extracting it with chloroform. This is not a sophisticated test, but experts said that with the extremely high levels of organic compounds of TCE in some of Lejeune wells, the CCE test results should have raised red flags.

According to the AP, Lejeune looked for CCE test results by couldn’t find any and no one at the base could remember running the tests.[2]

In response to a request from The Associated Press, Capt. Kendra Motz said this did not necessarily mean action was not taken.”[3]

But the two men who oversaw the base lab told the AP they were not even familiar with the procedure.

“A what?” asked Julian Wooten, who was head of the Lejeune environmental section during the 1970s, when asked if his staff had ever performed the CCE test? “I never saw anything, unless the (Navy’s) preventive medicine people were doing some. I don’t have any knowledge of that kind of operation or that kind of testing being done. Not back then.”[4]

I’d bet that no one at Lejeune is that dumb to admit that they ran the CCE test and ignored the red flags.

You can bet that El Toro didn’t run the test or, if they did, ignored the results, too.

Both Marine bases are on the EPA Superfund list—a list of the most toxic sites in the country.  Think of Love Canal and you get the general picture.

Lejeune had its ‘Marcellus’ in the roles played by the Army Environmental Hygiene Agency and Grainger Laboratories.

The only comparable ‘Marcellus’ figure at El Toro was Don Zweifel who told the Navy about the practice of burying TCE drums on the base by the Public Works Department to hide the use of TCE after it was banned from the Marine Corps Inspector General.   No action was taken to look for the 55 gallon drums and they are rotting in the ground fourteen years after the Marines left for Miramar.

Lejeune ignored reports from the Army and an independent contractor that its base wells were contaminated with organic solvents.  As many as one million Marines, dependents and civilian workers were exposed to toxic chemicals at Lejeune.

The base wells at El Toro were right in the path of a major TCE plume spreading off the base into the Orange County aquifer, the source of drinking water for millions.  The drinking water is not affected by the TCE plume since the local OCWD found contaminated agricultural wells and looked for the source of the plume, filed a lawsuit against the Marines and settled with the Navy for the clean-up action/cost.

The Navy dismisses contamination of the El Toro’s base wells and the very early purchase of small quantity of softened municipal water in 1951 and later in 1969 as the basis for no concern over the El Toro’s water.

Lejeune knew of the very high levels of organic solvents in its water supply in the early 1980s, but ignored the warnings and kept on pumping contaminated water.

There’s no head count of the injured and dead at El Toro. The Navy made a quick sale of most of the base in 2005 for $640 million, moved the 3rd Marine Aircraft Wing to Miramar, and agreed to clean-up the TCE plume contamination the Orange County aquifer; the clean-up cost will run into the millions and last at least 40 years (the best estimate from the Irvine Ranch Water District, which supplies water to the huge Orange County population.)

The Navy’s story is that El Toro’s early purchase of a small quantity of softened municipal water from the Metropolitan Water District (MWD) in 1951 led to the abandonment of well water.

But, the unexplained loss of 40 years of water distribution records, water distribution engineering drawings, the early cut off of well pumping records; no dates when the base wells were abandoned; the redrawing of the entire water distribution drawings in 1986 by a local A&E firm at substantial expense to the government; and evidence of well screens opened in the contaminated aquifer in 1998 raises serious questions that appear worthy of a grand jury probe. But don’t bet on any official probe at El Toro.

El Toro’s denial of TCE contamination was a blatant lie. They knew that TCE was used on the base for decades without any environmental concerns. The waste was dumped into the ground and found its way into the aquifer.

Lejeune had their off-base ABC cleaners (now closed) to blame for some of the TCE contamination; El Toro’s on-base cleaner used PCE.  El Toro’s cleaner was located in the path of the huge TCE plume; too close to the base wells.  You can guess where the PCE waste went.

El Toro’s TCE was used to degrease aircraft parts and clean hundreds of aircraft.  Marine aircraft were washed and cleaned with TCE for decades.  Other uses were made of TCE at El Toro.  Both TCE and PCE waste went into the ground and the aquifer, along with benzene, vinyl chloride, dioxin and a lengthy list of other toxic chemicals.

The aquifer flowed off of El Toro in the direction of the contaminated agricultural wells.  Even Government engineers in 1985 knew about TCE plumes and the risks of contamination.

Did El Toro shred records and redo its water distribution drawings in an attempt to hide its own well contamination history?

We know that by 1986, El Toro’s wells were not part of its water distribution system.  We don’t know if the agriculture well inspection in 1985 was the clarion call to redo engineering drawings, abandon any wells still in production, and shred records.

We know that El Toro military and civilians lied to EPA about the discontinuance of TCE on the base after the mid-1970s and buried TCE 55 gallon drums on the base to keep their use hidden from the Marine Corps Inspector General.

TCE was just too good of a cleaning solvent to walk away from.  Marines were not given protective clothing and face masks, even after the Corps knew of its toxicity.

El Toro veterans reported to Salem-News that TCE was used up until the base officially closed in 1999.

El Toro is not on any major media’s radar. The Marines left in July 1999.  El Toro, once the Marine Corps’ premier jet fighter base with less than 5,000 acres, was much smaller than Camp Lejeune massive 1 43,000 acres, home of the 2nd Marine Corps Division, and with multiple water distribution systems still drawing water from the aquifer under the base.

Congress approved health care for Camp Lejeune veterans and their dependents; there were no Congressional hearings and major media coverage for El Toro and no health care coverage for those who served at El Toro.

Veterans of both bases must file VA disability compensation claims supported by medical nexus opinions that their current medical conditions are caused by military service and be prepared to wage a long fight with the VA, including appeals of denials to Regional Offices and, if necessary, the Board of Veterans Appeals.

For those still at Lejeune today, let’s hope that today’s drinking water is closely monitored for contaminants; environmental safeguards are now in place to prevent the tragedy of water well contamination; and Marines who work with toxic chemicals and fuels wear protective clothing and face masks.

The Corps greatest assets are its Marines; there’s no excuse for putting them at risk for injuries and death from contaminated well water ever.

[1] Simple test from 1963 could have shown contaminated water: The Associated Press, “Victims claim Marines failed to safeguard water supply,” May 19, 2013.

[2] No one could remember the CCE tests:  Ibid.

[4]I never saw anything, unless the (Navy’s) preventive medicine people were doing some:  Ibid.