The Greek economic depressionary catastrophe continues to merrily chug along. Hours ago, Greek Elstat reported that February unemployment rose to a new record high of 27.0%, with the January number revised from 27.2% to 26.7%, up from 21.9% in February 2012, and almost as if unlike the Greek BLS is not even trying to fudge numbers anymore and wants to show a deteriorating situation (or, as it was called in the Old Normal – “reality”).

Looking at the Shadow economy, the number of people who are inactive, or “neither worked neither looked for a job”, hit 3,358,649. This number is just shy of the total people employed, meaning in 2-3 months, the Greek shadow economy will be greater than the official, taxed-one. A gender breakdown shows that females have never had it worse with 31% unemployment, compared to 24.1% for men.

But the most stunning number was the number of unemployed Greek youths (15-24), which hit a record 64.2%, the highest number on record, and a mindblowing 5% increase from the 59.3% youth unemployment reported in January, and a 10% increase from a year ago (and compared to 16.9% in neighboring Turkey). 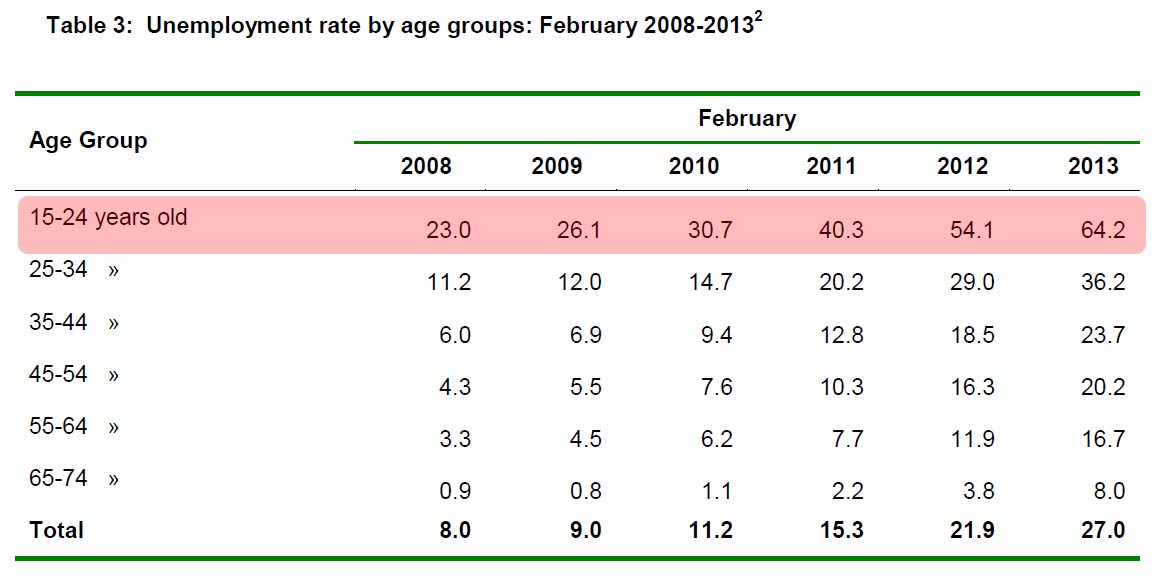 Remember: all those unemployed people according to CNBC are just employed people on the sidelines, and is a bullish sign of pent up jobs. And sooner or later, they will reemerge as victorious workers in some European Kolhoz bringing victory and prosperity to the latest European KomIntern.

1 thought on “Greek Unemployment Hits New Record High, Youth Jobless Rises By 5% In ONE MONTH To 64.2%”