– Where Is The Recovery? A Higher Percentage Of Americans Had Jobs Three Years Ago (Economic Colllapse, May 3, 2013):

If you think that the latest employment numbers are good news, you might want to look again.  In April 2013, 58.6 percent of all working age Americans had a job.  But three years ago, in April 2010, 58.7 percent of all working age Americans had a job.  Well, you may argue, that is not much of a difference.  And that is precisely my point.  The percentage of Americans that have a job fell like a rock during the last recession.  It dropped from about 63 percent all the way down to below 59 percent, and it has stayed below 59 percent for 44 months in a row.  So where is the recovery?  This is the first time in the post-World War II era that the employment-population ratio has not bounced back after the end of a recession.  So anyone that tells you that we are experiencing an employment recovery is lying to you.  Yes, the U.S. economy added 165,000 jobs last month.  But it takes nearly that many jobs just to keep up with population growth.  The truth is that we are just treading water.

So why has the unemployment rate been going down?  Well, it is because the government has been pretending that millions upon millions of unemployed Americans “don’t want jobs” anymore.  In fact, an astounding 9.5 million Americans have “left the workforce” since Barack Obama took office.

Some in the mainstream media have started calling them “missing workers”.  But whatever label you want to use, the reality of the matter is that they are really hurting.  They are part of the reason why food stamp enrollment has soared from 32 million to more than 47 million while Barack Obama has been in the White House.

If you still believe that the employment market is getting better, just look at the following numbers.  The percentage of working age Americans with a job has been sitting at about the same level for four years in a row…

So why is everyone getting so excited over the latest numbers?  When you step back and look at what has happened to the employment-population ratio over the past decade it really is quite horrifying… 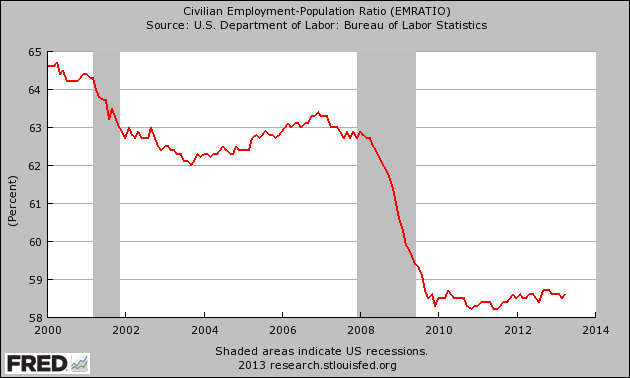 So exactly what part of that chart are we supposed to get excited about?

Yes, I suppose that we should be thankful that the percentage of Americans with a job has not continued to decline over the past few years.  Unfortunately, the next major wave of the economic collapse is rapidly approaching and that is going to make our employment crisis far worse.

A recovery was supposed to already happen by now.  Now we are running out of time before the next major downturn strikes.

And things have been particularly hard for our young people.  Even if our young people do go to college, there is a very good chance that good jobs will not be waiting for them once they graduate.

According to Accenture’s 2013 College Graduate Employment Survey, 41 percent of all Millennials who graduated from college during the past two years are working in jobs that actually do not require a college degree.

And a different survey conducted a while back found that 53 percent of all college graduates under the age of 25 are either unemployed or underemployed.

It is because the economy is not producing enough jobs for them.

We have shipped millions of good jobs overseas, we have replaced millions of jobs with technology, and we have created an economic environment that is murdering our small businesses.

Sadly, the future does not look bright for the American worker.  The big corporations that dominate our society are feverishly trying to increase profits by getting rid of as many “expensive” American workers as possible.  That is one of the reasons why corporate profits as a percentage of GDP are at a record high, but wages as a percentage of GDP are at an all-time low.

At this point there are more than 101 million working age Americans that do not have a job, and that number is going to go a lot higher in the years ahead.

But the financial markets seem to be absolutely thrilled with the present state of affairs.  The latest employment numbers caused the Dow to shoot past 15,000 and the S&P 500 to push past 1600.

Of course stocks have become completely and totally divorced from economic reality, but this does happen from time to time and it never lasts forever.  At some point there will be a rude awakening.

And I anticipated that we could potentially see the Dow hit 15,000 before it finally crashed.  Back in February, I made the following statement…

Right now, everyone seems to be quite giddy about the fact that the Dow is marching toward an all-time high.  And I actually do believe that the Dow will blow right past it.  In fact, it is even possible that we could see the Dow hit 15,000 before everything starts falling apart.

Well, now we have seen the Dow hit 15,000.  But that doesn’t change any of the long-term trends that are absolutely eviscerating our economy.

So enjoy this bubble of false hope while you can.

It will not last much longer.