… an incredulous 57.2% of under-25s out of work, Spain is closing in on Greece, according to official data, for the worst youth unemployment situation in Europe.

– Spain Is Beyond Doomed: The 2 Scariest Unemployment Charts Ever (The Atlantic, April 26, 2013):

Spain is in a great depression, and it is one of the most terrifying things I have ever seen.

(Note: The “already found work” category refers to people who did not have a job at the time of the survey, but did have a job lined up). 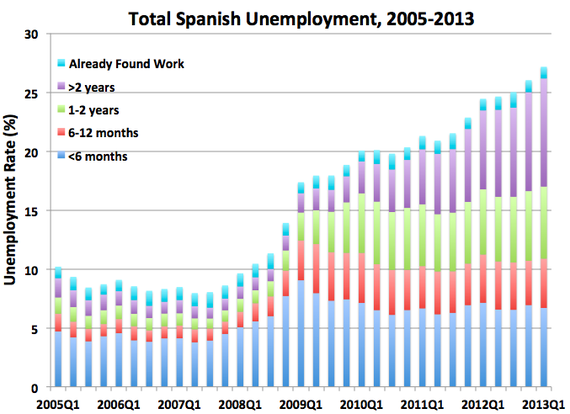 Here’s the story of Spanish unemployment in three acts. During the boom, joblessness was relatively high due to persistent structural problems. Then it shot up fast and faster as Spain’s building bust and then Lehmangeddon hit in 2008. But it has kept climbing up since the panic abated, albeit at a less catastrophic pace, due to the toxic combination of too tight money and budgets. 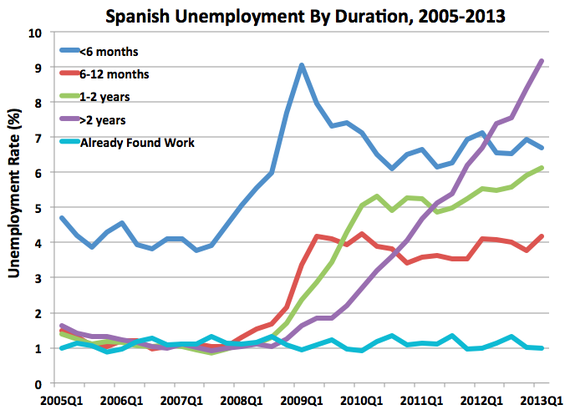 In other words, unemployment is a trap people fall into, but can’t fall out of. Indeed, the rate of new unemployment has stabilized at a terrible, but not quite-as-terrible, level, as you can see with the flat blue, red, and green lines. But the steadily rising purple line shows us that the rate of job-finding for the jobless has collapsed.

Spain’s labor market problems fall into two big buckets: too much regulation, and not enough education. It’s almost impossible for companies to get rid of older workers, which creates a horribly bifurcated labor market. There are permanent workers who can’t be fired, and temporary ones who can — and are. Indeed, as Clive Crook points out, about a third of Spain’s workforce are temporary workers who enjoy few protections and fewer opportunities. Companies go through these younger workers without bothering to invest much in their human capital, because why would they? These temporary workers will be let go at the first sign of economic trouble. Young people get stuck in a never-ending cycle of under-and-unemployment since firms are always hesitant to hire permanent workers who will always be on their books.

But it gets worse. The housing bust hasn’t just cast a shadow over household and bank balance sheets; it’s cast one over young people’s educations too. At its peak, building made up a whopping 19 percent of Spain’s economy, which, as Tobias Buck of the Financial Times points out, lured many young men into dropping out of school for well-paying construction gigs. But now that building has gone into hibernation, all of those young men are left with no work and no education to fall back on. And, again, even if they can find temporary jobs, it’s not as if the companies will spend money to develop their skills.

It’s hard to see anything resembling a case for optimism. Even though the Spanish government’s borrowing costs have fallen since the ECB introduced its backstop, Spanish business borrowing costs have not. Small and medium-sized enterprises can’t get capital except on prohibitively expensive terms. As Ryan Avent of The Economist points out, this broken monetary transmission mechanism means austerity is hurting Spain more than it otherwise would — which is clear enough in the data. Despite its cuts, Spain’s deficit actually worsened from 9.4 percent of GDP in 2011 to 10.6 percent of GDP in 2012, because its economy fell more than its borrowing costs. The only hint of good news here is Spain just announced it will take two more years to hit its deficit target. But less (self-defeating) austerity isn’t enough. Spain needs stimulus. And it might need bailouts too (or, if Cyprus does turn out to be a “template”, bail-ins). Indeed, The Economist calculates Spanish housing prices are stillovervalued by 20 percent or so — which will be even more bad news for its banks.

I wasn’t exaggerating when I said this is one of the most terrifying things I have ever seen. Spain needs shock therapy for its labor markets, but that’s an impossible political sell when more than a quarter of the population is unemployed. In an ideal world, Spain would pair major reforms with major stimulus; in the real world, it will drag its feet on reforms, try to cut its deficit, and fall deeper into depression.

Let me leave you with this, well, depressing question: Assuming everything goes perfectly, how long will it be till Spanish unemployment gets below 20 percent?

1 thought on “Spain Is Beyond Doomed (The Atlantic)”