– Boston Suburb, Transit Under Lockdown Following Shootout With One Bombing Suspect, Manhunt For Another, Both From Chechnya (ZeroHedge, April 19, 2013):

In a series of bizarre if morbid events, things in Boston have gone from bad to surreal. According to Reuters, police killed one suspect in the Boston Marathon bombing during a shootout and were engaged in a house-to-house search for the other on Friday in the Boston suburb of Watertown. The suspects, incidentally, as AP reports, are reportedly brothers and originally from the separatist Russian region of Chechnya, who lived in the US for at least 1 year and were Cambridge residents at the time of the incident.

The night started off in a just as dramatic fashion, with the violence beginning around 10:30 p.m., with the robbery of a 7-11 in nearby Cambridge, authorities said. The two men then fatally shot an MIT campus police officer and carjacked a Mercedes sport-utility vehicle at gunpoint, keeping the vehicle’s owner hostage for about a half-hour, police said. The owner was released at a gas station in Cambridge, authorities said. He wasn’t injured.

Police pursued that car to Watertown, where explosives were thrown from the car at police and gunfire was exchanged, the statement said.

“During the exchange of the gunfire, we believe that one of the suspects was struck and ultimately taken into custody. A second suspect was able to flee from that car and there is an active search going on at this point in time,” Colonel Timothy Alben, superintendent of the Massachusetts State Police, told a news conference.

The WSJ adds that a Boston Marathon bombing suspect was killed in a confrontation with police and a manhunt was on for the second suspect—both of whom were believed to be involved in the fatal shooting of an MIT campus police officer during a chaotic series of events Thursday night.

Authorities said the bombing suspect who had been shown wearing a black baseball cap in photographs released Thursday was killed when confronted by police in Watertown, Mass. The second suspect, a light-skinned man with long curly hair and wearing a hoodie who police said was the bombing suspect identified wearing a white hat, was still at large Friday morning. Neither man was identified. Police warned residents that the at-large suspect was armed and dangerous.

An interactive map of the events from the WSJ: 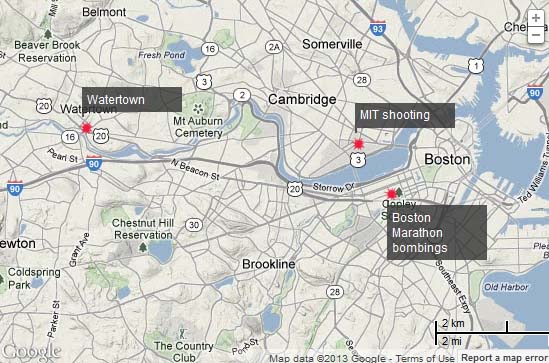 Fast forward to this morning, when authorities warned people in Watertown not to leave their homes and not to answer the door after a night in which a university police officer was killed, a transit police officer was wounded, and the suspects carjacked a vehicle, leading police on a chase.

Police were searching for the man known as Suspect 2 who was photographed wearing a white hat just before the explosions that killed three people and wounded 176. The blasts triggered security scares across the United States and evoked memories of the Sept. 11, 2001 attacks.

The AP reports that the name of the surviving suspect is Dzhokhar A. Tsarnaev, 19, of Cambridge, Mass.

The bombing suspects attacked police with explosives and gunfire before the man known as Suspect 1 was shot, apprehended, and taken to a hospital, where he died, officials said.

Officials shut down area transit systems while the manhunt was under way.

The two unidentified men were wanted for Monday’s twin bombings at the Boston Marathon, when two blasts ripped through the crowd near the finish line.

The massive police operation was under way in Watertown after the U.S. Federal Bureau of Investigation (FBI) on Thursday released pictures and video of two suspects in the Boston Marathon bombing.

The FBI had enlisted the public’s help in identifying two men wearing backpacks and baseball caps in the crowd minutes before bombs exploded near the finish line.

A photo of the surviving suspect Tsarnaev: 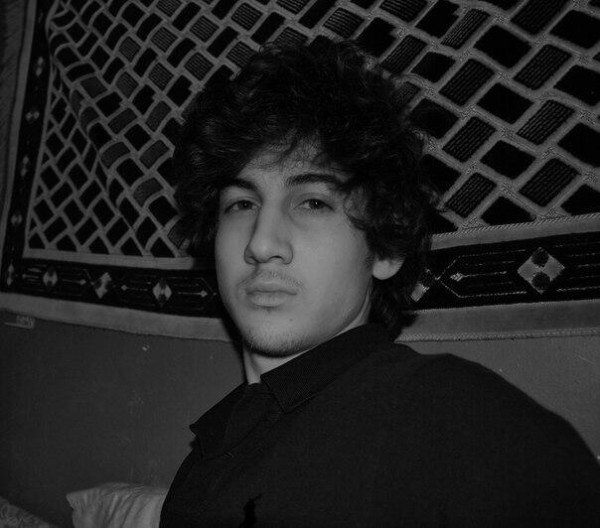 For those confused by the plotline here is the WSJ’s summary:

We have just gotten news that both Harvard and MIT have canceled classes for Friday, and that all Boston transit has been suspended in the manhunt:

Boston police said on Friday that all transit service by the Massachusetts Bay Transportation Authority “has been suspended until further notice” as a manhunt for a suspect in the bombing of the Boston Marathon was ongoing in a city suburb.

Vehicle traffic was also suspended in and out of Watertown, Boston police said.