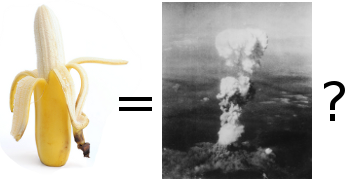 Nuclear apologists pretend that people are exposed to more radiation from bananas than from Fukushima.

But the EPA explains:

The amount of potassium (and therefore of 40K) in the human body is fairly constant because of homeostatsis, so that any excess absorbed from food is quickly compensated by the elimination of an equal amount.

It follows that the additional radiation exposure due to eating a banana lasts only for a few hours after ingestion, namely the time it takes for the normal potassium contents of the body to be restored by the kidneys.

A lot of things you might not suspect of being radioactive are, including Brazil nuts, and your own body. And this fact is sometimes used to downplay the impact of exposure to radiation via medical treatments or accidental intake.

I contacted Geoff Meggitt—a retired health physicist, and former editor of the Journal of Radiological Protection—to find out more.

Meggitt worked for the United Kingdom Atomic Energy Authority and its later commercial offshoots for 25 years. He says there’s an enormous variation in the risks associated with swallowing the same amount of different radioactive materials—and even some difference between the same dose, of the same material, but in different chemical forms.

It all depends on two factors:

1) The physical characteristics of the radioactivity—i.e, What’s its half-life? Is the radiation emitted alpha, beta or gamma?

2) The way the the radioactivity travels around and is taken up by the body—i.e., How much is absorbed by the blood stream?

What tissues does this specific isotope tend to accumulate in?

The Potassium-40 in bananas is a particularly poor model isotope to use, Meggitt says, because the potassium content of our bodies seems to be under homeostatic control. When you eat a banana, your body’s level of Potassium-40 doesn’t increase. You just get rid of some excess Potassium-40. The net dose of a banana is zero.

And that’s the difference between a useful educational tool and propaganda. (And I say this as somebody who is emphatically not against nuclear energy.) Bananas aren’t really going to give anyone “a more realistic assessment of actual risk”, they’re just going to further distort the picture.

Nuclear apologists also pretend that we get a higher exposure from background radiation (when we fly, for example) and or x-rays then we get from nuclear accidents.

In fact, there was exactly zero background radioactive cesium or iodine before above-ground nuclear testing and nuclear accidents started.

Wikipedia provides some details on the distribution of cesium-137 due to human activities:

Small amounts of caesium-134 and caesium-137 were released into the environment during nearly all nuclear weapon tests and some nuclear accidents, most notably the Chernobyl disaster.

Caesium-137 is unique in that it is totally anthropogenic. Unlike most other radioisotopes, caesium-137 is not produced from its non-radioactive isotope, but from uranium. It did not occur in nature before nuclear weapons testing began. By observing the characteristic gamma rays emitted by this isotope, it is possible to determine whether the contents of a given sealed container were made before or after the advent of atomic bomb explosions. This procedure has been used by researchers to check the authenticity of certain rare wines, most notably the purported “Jefferson bottles”.

As the EPA notes:

Cesium-133 is the only naturally occurring isotope and is non-radioactive; all other isotopes, including cesium-137, are produced by human activity.

Similarly, iodine-131 is not a naturally occurring isotope. As the Encyclopedia Britannica notes:

The only naturally occurring isotope of iodine is stable iodine-127. An exceptionally useful radioactive isotope is iodine-131…

As such, the concept of “background radiation” is largely a misnomer. Most of the radiation we encounter today – especially the most dangerous types – did not even exist in nature before we started tinkering with nuclear weapons and reactors. In a sense, we are all guinea pigs.

Moreover,  radioactive particles which end up inside of our lungs or gastrointestinal track, as opposed to radiation which comes to us from outside of our skin are much more dangerous than general exposures to radiation.

The National Research Council’s Committee to Assess the Scientific Information for the Radiation Exposure Screening and Education Program explains:

For example, when you get an x-ray, an external emitter is turned on for an instant, and then switched back off.

But internal emitters steadily and continuously emit radiation for as long as the particle remains radioactive, or until the person dies – whichever occurs first. As such, they are much more dangerous.

As the head of a Tokyo-area medical clinic – Dr. Junro Fuse, Internist and head of Kosugi Medical Clinic – said:

See this, this,this and this.

There are few natural high-dose internal emitters. Bananas, brazil nuts and some other foods contain radioactive potassium-40, but in extremely low doses. And – as explained above – our bodies have adapted to handle this type of radiation.

True, some parts of the country are at higher risk of exposure to naturally-occurring radium than others.

But the cesium which was scattered all over the place by above-ground nuclear tests and the Chernobyl and Fukushima accidents has a much longer half life, and can easily contaminate food and water supplies. As the New York Times notes:

Over the long term, the big threat to human health is cesium-137, which has a half-life of 30 years.

At that rate of disintegration, John Emsley wrote in “Nature’s Building Blocks” (Oxford, 2001), “it takes over 200 years to reduce it to 1 percent of its former level.”

It is cesium-137 that still contaminates much of the land in Ukraine around the Chernobyl reactor.

Cesium-137 mixes easily with water and is chemically similar to potassium. It thus mimics how potassium gets metabolized in the body and can enter through many foods, including milk.

As the EPA notes in a discussion entitled ” What can I do to protect myself and my family from cesium-137?”:

Cesium-137 that is dispersed in the environment, like that from atmospheric testing, is impossible to avoid.

Radioactive iodine can also become a potent internal emitter. As the Times notes:

Iodine-131 has a half-life of eight days and is quite dangerous to human health. If absorbed through contaminated food, especially milk and milk products, it will accumulate in the thyroid and cause cancer.

The bottom line is that there is some naturally-occurring background radiation, which can – at times – pose a health hazard (especially in parts of the country with high levels of radioactive radon or radium).

But cesium-137 and radioactive iodine – the two main radioactive substances being spewed by the leaking Japanese nuclear plants – are not naturally-occurring substances, and can become powerful internal emitters which can cause tremendous damage to the health of people who are unfortunate enough to breathe in even a particle of the substances, or ingest them in food or water.

Unlike low-levels of radioactive potassium found in bananas – which our bodies have adapted to over many years – cesium-137 and iodine 131 are brand new, extremely dangerous substances.

And unlike naturally-occurring internal emitters like radon and radium – whose distribution is largely concentrated in certain areas of the country – radioactive cesium and iodine, as well as strontium and other dangerous radionuclides,  are being distributed globally through weapons testing and nuclear accidents.

Even though the nuclear industry and government has been covering up the dangers of radiation ever since nuclear weapons were invented, there is overwhelming scientific evidence that even low levels of radiation can damage our health.