Interpol alerted after late Libyan dictator’s wife Safia, daughter and two sons flee Staoueli, near Algiers, where they were living 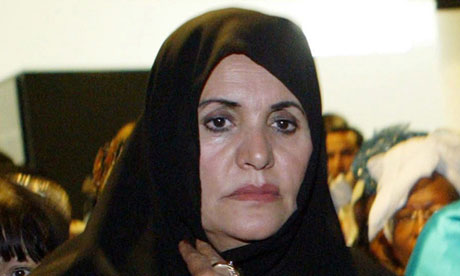 Muammar Gaddafi’s second wife, Safia, and three of their children had been living in Algeria since fleeing Libya in 2011. Photograph: Khaled El-Fiqi/EPA

Libyan officials are trying to locate Muammar Gaddafi’s wife and three of his children who are missing from their refuge in neighbouring Algeria.

Algeria confirmed the late dictator’s second wife, Safia, daughter Aisha, and sons Hannibal and Muhammad had fled the upmarket coastal region of Staoueli, close to Algiers, where they had lived since fleeing Libya in 2011.

Oman and Venezuela had both reportedly previously offered members of Gaddafi’s family asylum, and officials say it is also possible they have joined former Gaddafi fighters in Mali.

Gaddafi’s most prominent son, Saif al-Islam, remains in custody in the Libyan town of Zintan, and his brother Saadi is under house arrest in Niger.

Aisha’s Israeli lawyer, Nick Kaufman, would not comment on reports of their flight, but said he was representing her in efforts to get the international criminal court to investigate the killing of her father. “I was indeed retained by Aisha Gaddafi for one discrete issue; namely, seeking the opening of an investigation at the ICC into the murder of Muammar Gaddafi,” he told the Guardian.

The news of their disappearance comes as Egypt and Morocco announce the arrest of several prominent Gaddafi-era figures who had fled Libya, including Gaddafi’s cousin Ahmed Gaddafi al-Dam, captured in Cairo.

The three siblings fled Libya with Safia during the Arab spring revolution as rebel forces entered Tripoli in August 2011.

Aisha lost her husband and two children in the Nato bombing of Tripoli in 2011 and gave birth to a baby girl the day after arriving in Algeria.

Of the three, Libyan authorities are keenest to arrest Hannibal, formerly head of Libya’s maritime transport authority and who they say was part of Gaddafi’s inner circle.

Before the revolution, Hannibal, 37, became known for his brushes with the law in Europe. In 2008 he and his wife, Aline Skaf, a Lebanese model, were arrested by Swiss police after being accused of attacking members of their staff in a Geneva hotel. They were later released after Libya arrested two Swiss businessmen in apparent retaliation.

A year later police were called to reports of a woman screaming from the hotel room the couple shared at Claridge’s in London. Three bodyguards were arrested by police for obstruction and inside Skaf was found battered and bleeding and was treated in hospital.