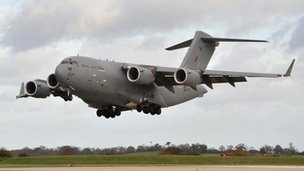 – UK Sends Planeload Of Cash To Its Cyprus Troops As A “Contingency Measure” (ZeroHedge, March 19, 2013):

We are presenting this Reuters story without any comment. None is necessary.

Britain said on Tuesday it had sent one million euros ($1.30 million) in cash to Cyprus aboard a military plane for its troops on the island in case cash machines and debit cards stop working.

“An RAF flight left for Cyprus this afternoon with €1M on board as a contingency measure to provide military personnel and their families with emergency loans in the event that cash machines and debit cards stop working completely,” the Ministry of Defence said in a statement.

“We will keep this under review and consider further shipments if required.”

British troops in Cyprus will be given the choice of having their monthly wages paid into British bank accounts rather than Cypriot ones in future, the statement added.

And some more from Sky:

Soldiers stationed on the island and their families would be able to borrow the money if cash machines and debit cards stop working completely, the Ministry of Defence said.

“The MoD is proactively approaching personnel to ask if they want their March, and future months’ salaries paid into UK bank accounts, rather than Cypriot accounts,” it said in a statement.

“We’re determined to do everything we can to minimise the impact of the Cyprus banking crisis on our people.”

Around 2,500 to 3,000 British military personnel are currently stationed in Cyprus.

Chancellor George Osborne has already pledged that military personnel and civil servants would be protected from the levy, telling Cabinet they would be “compensated in full” for any losses.

Cyprus’ finance minister Michael Sarris, meanwhile, has reportedly offered his resignation and the ruling party is said to considering abstaining from the vote.

Some local media have reported that no party will take part.

Reporting from outside parliament, Sky’s Ashish Joshi said: “The situation here is deteriorating quite rapidly.