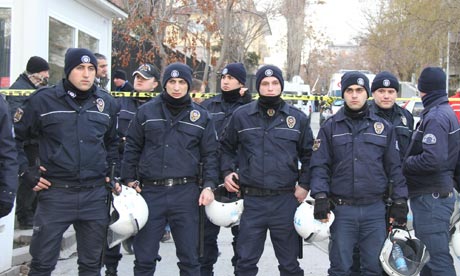 Turkish police closed off the street to all traffic for fear of a second bomb attack. Photograph: Li Ming/Xinhua/Corbis

The Obama administration has declared a suicide bomb at the US embassy in Turkey, in which the attacker and a local guard died, as an “act of terror”.

There was no immediate claim of responsibility, but Turkish prime minister Recep Tayyip Erdogan said preliminary information obtained by police indicated that the bomber was likely connected to a domestic left-wing militant group.

A Turkish television journalist was also seriously wounded in the blast, which happened at around 1.15pm local time in the Turkish capital, Ankara. Two other guards sustained lighter injuries. The ambassador, Francis Ricciardione, was unhurt.

According to Turkish daily Radikal, the suicide bomber was Ecevit Sanli, a leftwing activist and member of leftwing organisation Revolutionary People’s Liberation Party-Front, or DHKP-C. He was arrested in 1997 for an attack on a military dorm in Istanbul, and released in 2002, following an illness sustained by a period of hunger strike in prison.

Friday’s explosion occurred inside the security checkpoint at the side entrance to the embassy, which is used by staff. A guard standing outside the checkpoint was killed while the two guards who were wounded “were standing in a more protected area”, said the interior minister, Muammer Guler.

The embassy building in Ankara is heavily protected and located near several other embassies, including those of Germany and France.

Turkish police closed off the street to all traffic for fear of a second bomb attack, and embassy staff were moved to secure rooms inside the building.

In a statement, the embassy thanked “the Turkish government, the media, and members of the public for their expressions of solidarity and outrage over the incident”.

In Washington, Victoria Nuland, the state department spokeswoman, said: “We are working closely with the Turkish national police to make a full assessment of the damage and the casualties, and to begin an investigation.”

At the White House briefing, Jay Carney said: “A suicide bombing in the perimeter of an embassy is by definition an act of terror, a terrorist attack.” But he also said: “We do not know at this point who is responsible or the motivations.”

The injured journalist was 38-year-old Didem Tuncay, who until recently had worked for NTV television. A hospital official said she was “not in critical condition.”

Americans in Turkey were warned to avoid visiting the embassy or US consulates in Istanbul and Adana until further notice and were told to register on the State Department’s website.

Ricciardone declared that the US and Turkey “will continue to fight terrorism together” and described the embassy compound as secure. “From today’s event, it is clear that we both suffer from this terrible, terrible problem of today’s world. We are determined after events like this even more to cooperate together until we defeat this problem together,” he said.

Erdogan echoed that sentiment, saying the attack aimed to disturb Turkey’s “peace and prosperity” and demonstrated a need for international cooperation against terrorism.

Ricciardone visited Tuncay in the hospital and told reporters outside that he had invited her to the US embassy for tea. He also paid tribute to the Turkish guard who was killed, calling him a “Turkish hero” who died while defending US and Turkish staff at the embassy.