Things in France must not be very serious, because the French labor minister accidentally let the truth come out a little earlier today. As the Telegraph reports, France’s labour minister sent the country into a state of shock on Monday after he described the nation as “totally bankrupt.”

Remember: France is one of the supposedly stable countries in Europe.

“Michel Sapin made the gaffe in a radio interview, which left French President Francois Hollande battling to undo the potential reputational damage. “There is a state but it is a totally bankrupt state,” Mr Sapin said. “That is why we had to put a deficit reduction plan in place, and nothing should make us turn away from that objective.” It appears that once one wipes out the propaganda and the smooth politico talk, things are bad and getting worse at Europe’s core. “Data from Banque de France showed earlier this month that a flight of capital has already left the country amid concerns that France’s Socialist leader intends to soak the rich and businesses. The actor Gérard Depardieu has renounced his French citizenship and decamped to Russia in protest, while David Cameron said Britain will “roll out the red carpet” to attract wealthy individuals. Pierre Moscovici, the finance minister, said the comments by Mr Sapin were “inappropriate”.”

At least France can hike the tax on the millionaires to 75% to generate more money. Oh wait, no it can’t.

But if capital is leaving France, where is it going? The FT has the answer:

Almost €100bn of private funds flowed back into the eurozone’s periphery late last year after action by the European Central Bank encouraged reinvestment in the crisis-hit countries.

The scale of the net inflows, equivalent to about 9 per cent of the economic output of Spain, Italy, Portugal, Ireland and Greece according to calculations by ING, the Dutch bank, highlight the revival in investor confidence in Europe’s monetary union after Mario Draghi, ECB president, pledged to preserve its integrity.

The return of capital has encouraged policy makers to believe the eurozone crisis is over, with Mr Draghi this month pointing to “positive contagion” in the region. The euro has also moved sharply higher.

Turns out it isn’t, and the capital was merely rotating from the frying pan and into the 9th circle of insolvency hell. But at least the SNB is still buying up every French bond it can get its hands on to indicate that all is well with the “totally bankrupt state.”

And speaking of private capital rotation, well Europe needed it. Recall the chart of European M3 loans to non-financial corporations we showed earlier based on central bank data: 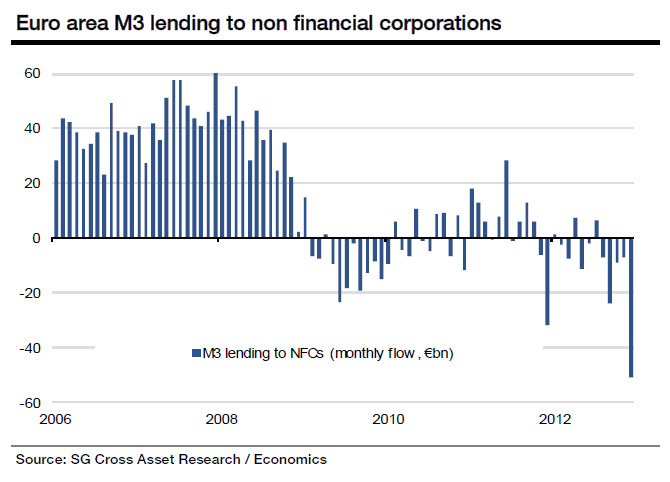 So if it wasn’t for the private capital scrambling to fill the hole, Q4 in Europe would have been an absolutely epic disaster. One can only hope that private funds are as bottomless as the public central banks backstopping them, because should there be a reflaring of risk, all bets for Europe are off, precisely at a time when everyone is hoping that the worst is behind and that Europe, as every European politician was quoted as saying in past weeks, is now “fixed.”

Of course, if France is totally bankrupt, there’s nothing that a little diversionary war can’t fix. Perhaps it is time to expand the Mali offensive a bit: there’s a tempting little country in Asia called Vietnam…