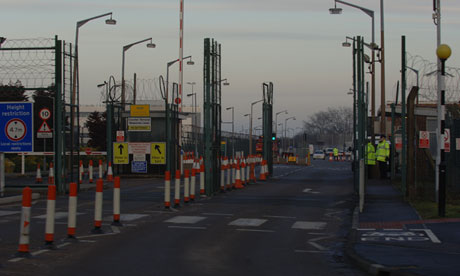 The nuclear weapons complex at Aldermaston in Berkshire, run by a private consortium for the MoD. Photograph: Martin Godwin

A top-secret plant at Aldermaston that makes enriched uranium components for Britain’s nuclear warheads and fuel for the Royal Navy’s submarines has been shut down because corrosion has been discovered in its “structural steelwork”, the Guardian can reveal.The closure has been endorsed by safety regulators who feared the building did not conform to the appropriate standards. The nuclear safety watchdog demands that such critical buildings are capable of withstanding “extreme weather and seismic events”, and the plant at Aldermaston failed this test.

It has set a deadline of the end of the year for the problems to be fixed.

Although the closed plant has not been officially named for national security reasons, the Guardian understands it is known as A45. It makes enriched uranium components for Trident nuclear warheads and has recently been helping to make the uranium fuel for the Astute generation of nuclear-powered submarines.

The Ministry of Defence insisted it had contingency plans to cover the loss of the plant, but prolonged closure could force the government to buy materials from the US to ensure there is no disruption to Britain’s nuclear weapons programme.

The government’s safety watchdog, the Office for Nuclear Regulation has taken legal enforcement action against AWE, the private consortium that runs the nuclear weapons complex at Aldermaston, Berkshire, ordering that the corroded steel be repaired.

Though the corrosion was first found last May and the enforcement notice served in November, the information only emerged via an ONR newsletter published online in the past few days. This has prompted critics to accuse AWE of not being forthcoming about a problem it detected eight months ago.

The ONR confirmed that inspections by AWE “discovered an unexpected area of corrosion on structural steelwork in one of their manufacturing facilities at Aldermaston”.

The ONR launched an investigation that concluded AWE had breached a condition of its operating licence meant to ensure safe operation. “AWE had not fully complied with licence condition 28(1) in so far as its arrangements to examine, maintain and inspect the structure were not adequate to prevent the degradation of the structure, and the resulting challenge to its nuclear safety functions,” said an ONR spokesman.

The ONR served a formal improvement notice on the company on 8 November requiring action before the end of 2013 “to ensure that the structure is repaired such that its safety function is fully restored”. The ONR plans to publish the notice and a report about it in February. It is believed the notice will criticise AWE for failing to carry out adequate maintenance on the building which led to it falling into disrepair.

Though the report will say the plant remained safe to enter, AWE could not give necessary assurances that it could withstand foreseeable “exceptional challenges”, and decided to suspend operations as a precaution.

AWE is checking the condition of similar facilities at Aldermaston and its nearby Burghfield site.

AWE is run for the Ministry of Defence by a group of three private companies: Lockheed Martin and Jacobs Engineering Group from the US and the British company Serco. It provides and maintains the nuclear warheads for Trident missiles carried by four Vanguard-class submarines based on the Clyde near Glasgow.

AWE confirmed it had found steel corrosion in May, and “degradation” in other structural components during inspections in July and August. “At that time, AWE immediately suspended routine operations as a precaution,” said an AWE spokeswoman.

The ONR improvement notice “formalises a lot of the inspection and review work that has already been carried out since August”, she said. “AWE is working closely with the ONR to ensure that its inspections, safety measures and planning for remedial work are carried out with their full knowledge and consent.”

Until the problem has been fully assessed “no firm date can be given for final completion of necessary works”, she added. “Throughout this process we have kept our regulators, the MoD and our local liaison committee fully informed.”

According to the MoD, the enforcement action had had no immediate impact on its submarine programmes. It is understood, however, that the long-term implications are still being assessed.

“A regular inspection showed signs of corrosion in a steel column and AWE is now working to inspect the whole building, assess the extent of the problem and consider how best to rectify it,” said an MoD spokesman.

The MoD said buildings at Aldermaston had to be maintained to the highest standards, and though this plant currently does not meet the safety criteria, it did not believe there was any risk associated with the corroding pipes.

The Green MP, Caroline Lucas, is tabling a series of parliamentary questions about the corrosion. She welcomed the ONR’s enforcement action, but argued that “serious questions” remained over the adequacy of the inspections conducted by AWE.

“The MoD’s ancient and rickety nuclear infrastructure is clearly not up to the job of replacing the current Trident nuclear weapons system,” she said. “Rebuilding it to modern safety standards will add even more to the vast costs of the programme.”

Peter Burt, from the Nuclear Information Service which monitors Aldermaston, said: “We should be concerned that … the matter only became known when ONR insisted on reporting details in one of its regular reports.”