In my opinion Rand Paul has lost all credibily by endorsing elite puppet Mitt Romney. 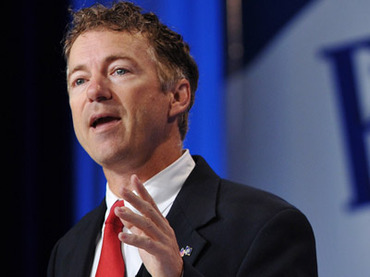 Sen. Rand Paul has made plans to nullify President Obama’s 23 executive actions on gun control policy, claiming the president is exercising too much power and demonstrating a ‘king complex’.

The Kentucky Senator made a Wednesday night appearance on Fox News’ “Hannity”, during which he outlined the legislation he hopes to pass in order to prevent the president from using his executive powers.

“Our founding fathers were very concerned about us having separation of powers. They didn’t want to let the president become a king,” Paul said. “In this bill, we will nullify anything the president does that smacks of legislation.”

Paul’s bill, the Separation of Powers Restoration and Second Amendment Protection Act of 2013, points to Article I of the Constitution, which states, “All legislative powers herein granted shall be vested in a Congress of the United States.” The bill makes mention of the president’s 23 executive actions, which “could be construed to describe an attempt by the executive to make laws in violation of the Article 1, Sec. 8 of the Constitution and the 2ndAmendment.”

President Obama on Wednesday laid out the 23 executive actions, which he believes will put an end to “the epidemic of gun violence in this country”. His new restrictions would tighten the background check and information sharing system for gun purchases and more closely tackle the issue of mental health. They would also maximize law enforcement efforts at preventing and prosecuting gun crimes and more closely monitor where firearms are stored – especially those recovered in criminal investigations.

Since the president announced these actions without congressional approval, opponents of the measures, including Paul, have criticized the decision. Paul did not discuss his views on the individual actions themselves, but reviewed his concern with the president’s use of his executive powers.

“This idea of checks and balances and separation of powers should be a fundamental one,” he said, explaining his hopes to nullify the president’s gun control actions. Paul said his bill is lagging support from Democrats and could therefore stall in the Senate. But if it were to pass, it would nullify the president’s executive orders, defund them and ask the Senate to file a court challenge to them.

President Obama announced the 23 executive actions without congressional approval, but is relying on legislators to make their own decisions on a number of more significant gun control measures. Obama recommended reinstating the assault weapons ban, restoring a 10-round limit on ammunition magazines, providing mental health services at schools, hiring more police officers, among other policies that require congressional approval.

“I intend to use whatever weight this office holds to make them a reality,” Obama said. “If there’s even one life that can be saved, then we’ve got an obligation to try.”