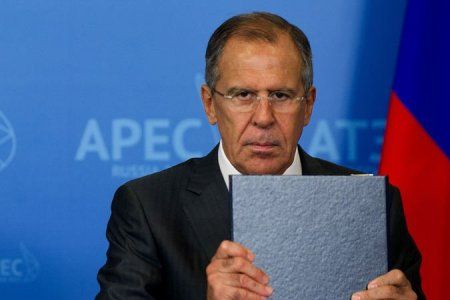 Russian Foreign Minister Sergei Lavrov on Thursday hit out at the United States for “blasphemous” accusations blaming this week’s blasts in the city of Aleppo on the Syrian government.

“Yesterday I saw a semi-neutral report on CNN that it was not ruled out that this terrorist act had been staged by the government forces themselves,” Lavrov said in the Tajik capital Dushanbe.

“I cannot imagine anything more blasphemous.”

Earlier this week two blasts tore through an Aleppo campus while students were writing exams, killing at least 87 people. No one has claimed responsibility for the blasts.

In a statement on Wednesday, the Russian foreign ministry blamed “terrorists” for the “merciless bloody provocation.”

It said the explosions were “the terrorists’ revenge for the significant losses sustained in their confrontation with government forces.”

But the United States on Wednesday said the blasts were caused by the government forces unleashing air strikes on the university buildings.

“The United States is appalled and saddened by the Syrian regime’s deadly attack yesterday on the University of Aleppo,” State Department spokeswoman Victoria Nuland said. AFP

International envoy Lakhdar Brahimi and senior envoys from Russia and the United States called for a political solution to end Syria’s crisis on Friday January 11, but reached no breakthrough. Reuters

Syria has been experiencing unrest since March 2011, and many people, including large numbers of security forces, have been killed.

The Syrian government says the chaos is being orchestrated from outside the country, and there are reports that a very large number of the militants are foreign nationals.