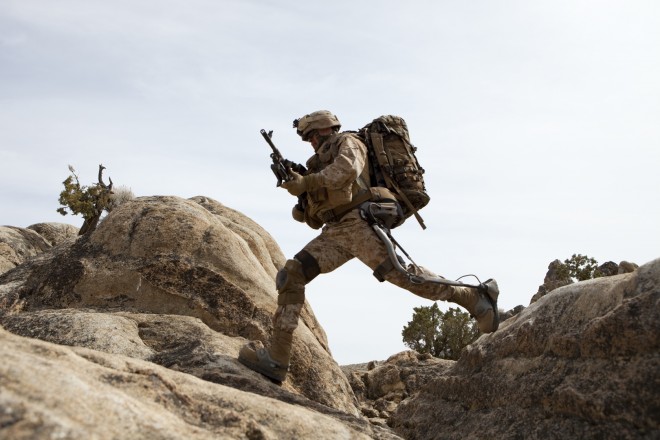 But the risk, ethics and policy issues arising out of these so-called “military human enhancements” — including drugs, special nutrition, electroshock, gene therapy and robotic implants and prostheses — are poorly understood, Lin and his colleagues Maxwell Mehlman and Keith Abney posit in a new report for The Greenwall Foundation (.pdf), scheduled for wide release tomorrow. In other words, we better think long and hard before we unleash our army of super soldiers.

If we don’t, we could find ourselves in big trouble down the road. Among the nightmare scenarios: Botched enhancements could harm the very soldiers they’re meant to help and spawn pricey lawsuits. Tweaked troopers could run afoul of international law, potentially sparking a diplomatic crisis every time the U.S. deploys troops overseas. And poorly planned enhancements could provoke disproportionate responses by America’s enemies, resulting in a potentially devastating arms race.

“With military enhancements and other technologies, the genie’s already out of the bottle: the benefits are too irresistible, and the military-industrial complex still has too much momentum,” Lin says in an e-mail. “The best we can do now is to help develop policies in advance to prepare for these new technologies, not post hoc or after the fact (as we’re seeing with drones and cyberweapons).”

Case in point: On April 18, 2002, a pair of Air Force F-16 fighter pilots returning from a 10-hour mission over Afghanistan saw flashes on the ground 18,000 feet below them. Thinking he and his wingman were under fire by insurgents, Maj. Harry Schmidt dropped a 500-pound laser-guided bomb.

There were no insurgents — just Canadian troops on a live-fire exercise, four of whom were killed in the blast. The Air Force ultimately dropped criminal charges against Schmidt and wingman Maj. William Umbach but did strip them of their wings. In a letter of reprimand, Air Force Lt. Gen. Bruce Carlson accused Schmidt of “willful misconduct” and “gross poor judgment.”

Schmidt countered, saying he was jittery from taking the stimulant Dexedrine, an amphetamine that the Air Force routinely prescribes for pilots flying long missions. “I don’t know what the effect was supposed to be,” Schmidt told Chicago magazine. “All I know is something [was] happening to my body and brain.”

The Food and Drug Administration warns that Dexedrine can cause “new or worse aggressive behavior or hostility.” (.pdf) But the Air Force still blamed the pilots.

The Canadian “friendly fire” tragedy underscores the gap between the technology and policy of military human enhancement. Authorities in the bombing case could have benefited from clearer guidelines for determining whether the drugs, rather than the pilots, were to blame for the accidental deaths. “Are there ethical, legal, psycho-social or operational limits on the extent to which a warfighter may be enhanced?” Lin, Mehlman and Abney ask in their report.

Now imagine a future battlefield teeming with amphetamine-fueled pilots, a cyborg infantry and commanders whose brains have been shocked into achieving otherwise impossible levels of tactical cunning.

These enhancements and others have tremendous combat potential, the researchers state. “Somewhere in between robotics and biomedical research, we might arrive at the perfect future warfighter: one that is part machine and part human, striking a formidable balance between technology and our frailties.”

In this possible mutant future, what enhancements should be regulated by international law, or banned outright? If an implant malfunctions or a drug causes unexpected side effects, who’s responsible? And if one side deploys a terrifying cyborg army, could that spark a devastating arms race as nations scramble to out-enhance each other? “Does the possibility that military enhancements will simply lead to a continuing arms race mean that it is unethical to even begin to research or employ them?” Lin, Mehlman and Abney wonder.

The report authors also question whether the military shouldn’t get give potential enhancement subjects the right to opt out, even though the subjects are otherwise subject to military training, rules and discipline. “Should warfighters be required to give their informed consent to being enhanced, and if so, what should that process be?” the researchers ask.

The ethical concerns certainly have precedent. In a series of experiments in the 1970s aimed at developing hallucinogenic weapons, the Pentagon gave soldiers LSD — apparently without the subjects fully understanding the consequences of using the drug. During the Cold War U.S. troops were also exposed to nerve gas, psychochemicals and other toxic substances on an experimental basis and without their consent.

Moreover, it’s theoretically possible that future biological enhancements could be subject to existing international laws and treaties, potentially limiting the enhancements — or prohibiting them outright. But the application of existing laws and treaties is unclear, at best. ”Could enhanced warfighters be considered to be ‘weapons’ in themselves and therefore subject to regulation under the Laws of Armed Conflict?” the researchers write. “Or could an enhanced warfighter count as a ‘biological agent’ under the Biological and Toxin Weapons Convention?”

Lin, Mehlman and Abney aren’t sure. To be safe, they propose the military consider several rules when planning an enhancement. Is there a legitimate military purpose? Is it necessary? Do the benefits outweigh the risks? Can subjects’ dignity be maintained and the cost to them minimized? Is there full, informed consent, transparency and are the costs of the enhancement fairly distributed? Finally, are systems in place to hold accountable those overseeing the enhancement?

Whether following these guidelines or others, the Pentagon should start figuring out a framework for military human enhancement now, Lin and his colleagues advise. “In comic books and science fiction, we can suspend disbelief about the details associated with fantastical technologies and abilities, as represented by human enhancements,” they warn. “But in the real world — as life imitates art, and ‘mutant powers’ really are changing the world — the details matter and will require real investigations.”