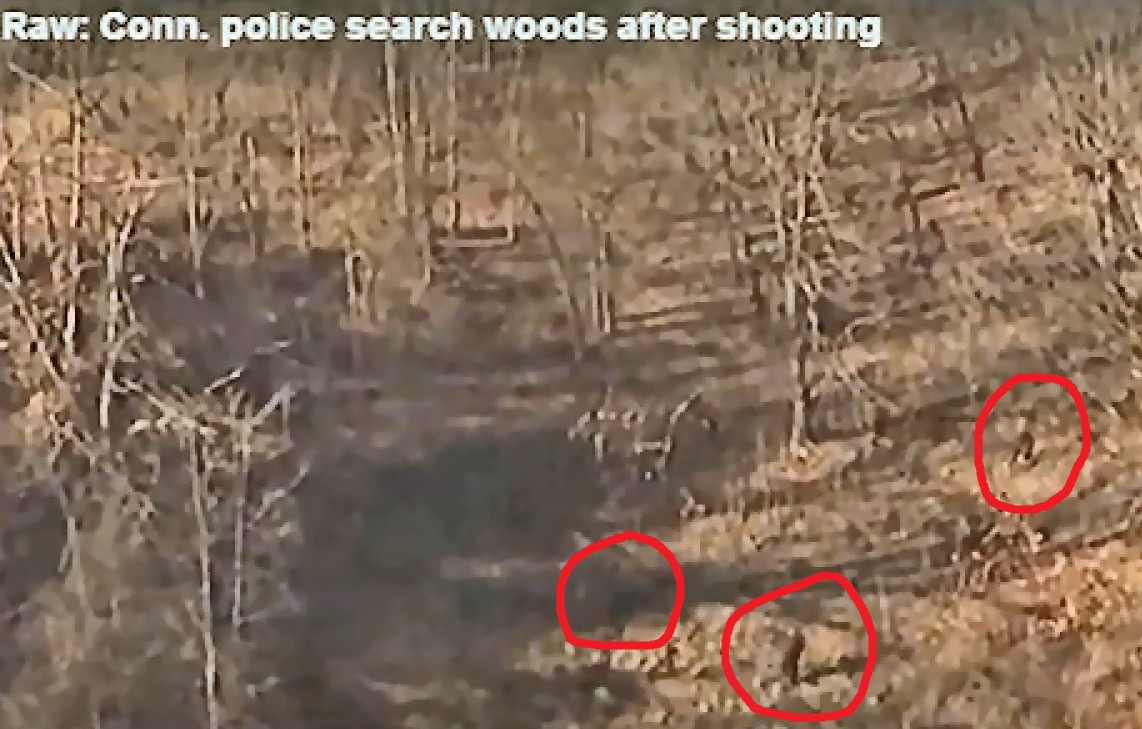 4TH SUSPECT BEING OUT OF ONE, ENHANCED FRAME FROM HELICOPER FOOTAGE, SANDY HOOK

Firstly a very Merry Christmas and Happy New Year to everyone, even Thames Valley Police, Britain’s answer to the dumbass Chief Lorenzo in Die Hard 2.  Seasons Greetings go in particular to the people of Newtown, Connecticut, still reeling from the Sandy Hook shooting.

Nicole Hockley, the mother of the British victim, Dylan Hockley, aged just 6, has pleaded that “this cannot be a pointless tragedy.”  Sadly it will be if the mistakes of Virginia Tech, Oslo and Aurora are repeated.  Each of those was orchestrated by a hostile intelligence agency – North Korea’s Research Department for External Intelligence (RDEI) in Virginia, Germany’s DVD in the case of Oslo and Germany’s COREA Group (the DVD’s penetration operation inside CIA, based at Frankfurt) in the case of Aurora.

Like Oslo, Sandy Hook involved multiple shooters.  The mainstream media calls for gun control are a mindless, knee-jerk reaction.  Since a hostile intelligence agency was clearly involved how would gun control affect matters?  Firstly, if the guns could not be acquired lawfully they would be supplied.  Secondly, we do not know whether all the weapons used so outrageously at Sandy Hook were legally acquired.  It is highly probable that most were not.

Wayne LaPierre’s courageous comments on the need for armed wardens were a good call, with respect.  It is good to see the NRA contributing to the debate with reasoned argument.  Bad Guys with guns can only be stopped Good Guys with guns.  Unarmed primary school teachers can only shelter their charges behind them but however courageous – and the teachers of Sandy Hook Elementary School will be remembered in a century’s time – they cannot stop them being murdered after they themselves have been cruelly gunned down.  Larry Pratt, President of Gun Owners of America, got it right, with respect, when he emphasized that gun control supporters have the blood of little children on their hands.  The kids at Sandy Hook needed somebody to fire back on their behalf.

Politicians should stop allowing their judgment to be clouded by emotion.  Yes, it is distressing when the Bad Guys murder little children, but caving in to their agenda will just get more children killed.   One of the reasons the selected targets were so young was to get us to lose control of our emotions.  Once you’ve lost control of your emotions it’s easy to lose control of your judgment.   Obama has clearly lost his.

Emotions are a good thing.  I am not ashamed to say that I cried for the little ones murdered in Newtown.  I was particularly moved during a magnificent performance at the Royal Albert Hall on Monday by the Royal Choral Society of Gabrieli’s lovely O Magnum Mysterium. As an intelligence analyst however you cannot indulge in the luxury of wallowing in emotion when you are applying your mind to a problem.  Apart from anything else your conclusions, if wrong, may lead to the wrong Bad Guy being taken down, although as a barrister there is always a Chinese Wall between your analysis and any kinetic application of force based upon it.

A number of us on Veterans Today have been thrashing around the issues, so apologies if you’ve seen this elsewhere.  Some of these points are not mine, but arguments made to me which I consider to be sound.  As always I am happy to give credit where it is due, so if anybody wants an acknowledgement I shall be happy to give it.  The trolls no doubt will say ‘but you can’t accept anybody else’s argument!’   Oh yes I can, if it’s a good one.  I’m not such an egotist to think I know all the answers – if I were I’d be working for Thames Valley Police (it must be nice to have a job where you can leave your brain at home!).  Where I accept an argument however I am always willing to give credit to whoever came up with it.   I also respect the confidentiality of communications to me.

There were clearly multiple shooters.  Consensus in INTELCOM seems to be moving towards three.  There is NO consensus that Adam Lanza was one of the shooters.  There is no solid forensic trail between him and any of the murders.  Gordon may tell you his body was brought in.  I incline to the view that he was there, and participated, but I retain an open mind.  At least one other shooter appears to have been briefly in custody, before being released.  The public statements of the police do not match the radio intercepts.

This does not mean that every officer involved is happy with the cover-up.  So far to the contrary it is clear that some of INTELCOM’s intelligence is coming from within the local police and possibly also CSP.  Someone is also talking to NYPD, to judge from the leaching of information to the New York Fire Department.  There is awareness in New York that they are fighting the same enemy as on 9-11.  Well done by the way to the firemen for paying their respects.  That was good to see.

I am NOT buying the idea that Lanza killed his mother, on whom he was very dependent.  Again the evidence is very weak and consists of little more than statements to that effect.  A press release is not evidence, except of the intent of the person pushing out the statement.  Her survivalist credentials are a little thin too, although not as paper-thin as Breivik’s ‘extreme right-wing’ credentials.

It is now clear that Lanza was not mentally ill, although he was a loner and an introvert.  That is not the same thing as being mentally ill.  If he did carry out some of the murders he was clearly not the major player, or the planner of the operation.  I am told the SATINT is particularly helpful, but if you want the good stuff word is you’ll have to talk to the Russians.  If the President’s Administration in Moscow, or the excellent Russian SVR, could brief in the Russian media that would be extremely helpful.  There is NO chance of anyone in Washington or Hartford telling the media the truth.  It would not be usual even in the most normal of circumstances, and these circumstances are far from normal.

The evidence that Lanza committed suicide is also pretty thin.  It is clear he was shot – the issue is, by whom?  There does not seem to have been an independent autopsy.

The poor parents are desperate to prevent this murderous nonsense happening to other families, but with respect they are not thinking straight.  The more they go down the line of pushing gun control, the more they play into the COREA Group’s hands.  At this time the chances of COREA not being involved are pretty slim.  There are deeper things at work here however than pushing gun control.

The Germans may have been sending a message to the Administration over the stolen funds sitting in New York which are being traded to prop up the euro.  There was a lot of activity around that in the run-up to the shootings.  Whether Lanza’s father was in the loop on the trading, possibly in trying to stop it, could be a legitimate line of inquiry (he comes across with respect as a decent man).  Lanza was chosen for this operation for a reason, and it was nothing to do with his allegedly being a pupil at Sandy Hook.

Some one in the Administration must have been in the loop.  We may get a clue as to who it was over the next few years.  You would be surprised how much damage being involved in the murder of children can do to the mind of even the most evil man or woman, even if they come from Chicago.

The two shooters who survived will almost certainly have been taken down by their own side already.  The Good Guys however will want to hunt down and eliminate those higher up the food chain.  I have no doubt they will be identified and will find themselves on the wrong end of a Big Sig, in God’s good time.  As a lawyer I wish I could say that there was a better way, and I am bound to advise against kinetic methods.

Our legal systems however lack the sophistication to understand a black-op of this nature and the moral fiber to deal with it.  Just look at the way Norway’s legal system rolled over for the mass shootings there.  Breivik’s trial, with respect (and I take no pleasure in saying this) was little more than a propaganda exercise for the absurd mad, lone gunman theory.  It was Norway’s answer to the deeply discredited Warren Commission.

Again, Merry Christmas to one and all.  If you’re a Mayan, don’t forget to buy your new calendar.