(Commentary and links down below.) 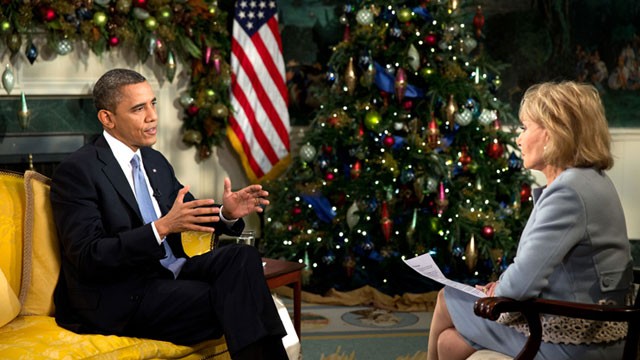 President Barack Obama participates in an interview with ABC’s Barbara Walters in the Diplomatic Reception Room of the White House, Dec. 11, 2012.

The announcement, made during an exclusive interview with ABC News’ Barbara Walters, grants new legitimacy to the rebel group and marks a new phase in U.S. efforts to isolate the Assad regime.

“It’s a big step,” Obama said of the decision. The United States follows Britain and the European Union, both of which last month recognized the Syrian opposition group.

The diplomatic designation will allow the United States to more closely support rebel efforts, including the organization of a future post-Assad government, administration officials said.

“Obviously, with that recognition comes responsibilities,” Obama said of the young coalition. “To make sure that they organize themselves effectively, that they are representative of all the parties, [and] that they commit themselves to a political transition that respects women’s rights and minority rights.”

The move does not include the provision of weapons, but it opens the door for that possibility in the future.

But the official added, “the president has never ruled out in the future providing arms.”

Obama expressed caution today about some Syrian factions involved with the coalition, warning that the United States will not support extremist elements.

“Not everybody who’s participating on the ground in fighting Assad are people who we are comfortable with,” Obama told Walters. “There are some who, I think, have adopted an extremist agenda, an anti-U.S. agenda, and we are going to make clear to distinguish between those elements.”

The president specifically singled out the group Jabhat al-Nusrah for its alleged affiliation with Al Qaeda in Iraq. The State Department says the jihadist group is responsible for nearly 600 violent attacks in major Syrian cities in the past year.

“Through these attacks, al-Nusrah has sought to portray itself as part of the legitimate Syrian opposition while it is, in fact, an attempt by [Al Qaeda in Iraq] to hijack the struggles of the Syrian people for its own malign purposes,” State Department spokeswoman Victoria Nuland said.

Recognition of the Syrian rebel group has been expected. Secretary of State Hillary Clinton was to formally announce the new relations with the United States during a meeting of international allies supporting Syria’s rebels in Marrakech, Morocco, on Wednesday.

She has since cancelled her trip because of an illness. Her deputy, Bill Burns, will attend in her place.

We created the opposition, …

And as much as the US wants to get away with Libya 2.0 in Syria, there is still one problem to solve and that is RUSSIA:

– Sergei Lavrov: Russia Will Not Allow Libyan Scenario In Syria

But if our terrorist allies manage to blow up some chemical weapons (delivered by us) somewhere, …

… and we can blame it on Assad then maybe Russia will stand down and let us slaughter Syria.

Tell me that the US and our NATO allies do not have a plan, when …

… all of this madness (including WW3) has been planned and plotted years ago.