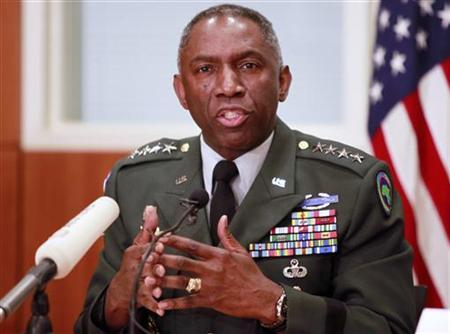 In more bad news about U.S. generals, Defense Secretary Leon Panetta, who is in Australia for talks, announced on Wednesday he was demoting a retiring four-star Army general for wasting taxpayer money on extravagant trips and would seek to recoup tens of thousands of dollars from him.Panetta’s decision to strip a star from General William Ward, a former commander of Africa Command, comes as the military is reeling from a scandal involving two of the most powerful men in the United States’ national security apparatus.

David Petraeus, a retired four-star general who ran the war effort in Afghanistan until last year, resigned as the director of the CIA over a sex scandal on Friday. The Pentagon announced on Monday that Petraeus’ successor in Afghanistan, Marine General John Allen, was also being investigated, as the scandal widened.

The investigation into Ward by the Pentagon’s Inspector General found numerous examples of wasted taypayer money, including taking his official plane to Bermuda for an overnight refueling stop with his wife.

The Pentagon said it was requesting that Ward reimburse $82,000 in expenses, citing misconduct in travel, misuse of military aircraft and misuse of staff.

Although Ward’s demotion to a three-star lieutenant general will knock off over $30,0000 in retirement pay, he will still receive a pension of over $200,000 a year, a U.S. defense official said.