Voters in Washington state overwhelmingly approved ballot initiative I-502 to end the prohibition of marijuana. Washington joined Colorado voters in legalizing marijuana for recreational use. But not to be outdone voters in Washington emphatically made their views clear with an 11-point victory for legal cannabis, where Colorado’s Amendment 64 was carried by 6 points. 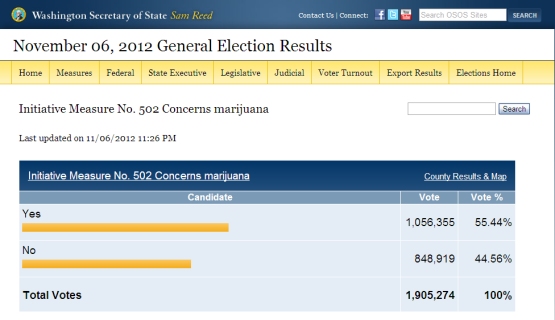 Washington’s Initiative 502 not only protects medical marijuana patients from arrest, it also legalizes it for recreational use for those 21 years or older. Here is the summary of the law:

This law legalizes the possession of marijuana for adults age 21 and older. The only marijuana that would be legal to sell in this state would be grown by specially-licensed Washington farmers and sold in standalone, marijuana-only stores operated by private Washington businesses licensed and regulated by the state. There would be a 25% sales tax, with 40% of the new revenues going to the state general fund and local budgets, and the remainder dedicated to substance-abuse prevention, research, education and health care. Advertising would be restricted. A new marijuana DUI standard that operates like the alcohol DUI standard would be established.