– Me and My Censor: A Reporter’s Memoir Of What It’s Like To Tell The Truth About Today’s China

The forces of reaction and economic folly threaten to prevail in China. The long political arm of Jiang Zemin has reached out from the shadows to thwart reform, with huge implications for Asia and the world. 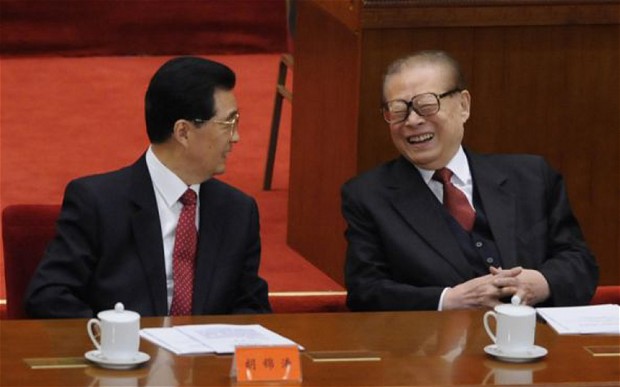 Hu Jintao (L) And Jiang Zemin Attend the 100th Anniversary Of China’s 1911 Revolution. The 86-year Mr Jiang — who rose to supreme leader on the bones of Muxidi and Tiananmen in 1989 — has placed his accolytes in charge of the economy, propaganda, as well as the Shanghai party machine. Photo: Getty Images

If reports from the Hong Kong press and China’s blogosphere are correct, a remarkable upset has occurred on the eve of the ten-year power shift next week — the greatest turn-over of top cadres since Mao’s revolution.

The South China Morning Post says the new line-up of the Politburo’s Standing Committee is “packed with conservatives”. The succession deal agreed over the summer has been scuppered.

The 86-year Mr Jiang — who rose to supreme leader on the bones of Muxidi and Tiananmen in 1989 — has placed his accolytes in charge of the economy, propaganda, as well as the Shanghai party machine.

The hardliners seem poised to snatch control of the seven-man Committee, tying the hands of incoming president Xi Xinping and premier Li Keqiang. If confirmed, long-term investors may have to rethink their core assumption about the future course of China.

This power struggle going into the 18th Party Congress matters more in the sweep of history than the run-off two days earlier between a centrist Barack Obama or the centrist Mitt Romney, though the stage drama is less compelling.

Mr Jiang’s rear-guard coup should give pause to thought. It was he who instituted the Patriotic Education movement in schools in the 1990s, whipping up nationalist fervour to replace the lost mystique of Maoism. The effect was to nurture revanchist hatred against Japan, creating a monster that now requires feeding.

His eerie return comes at a time when China and Japan are “one error away” from outright war over the Diaoyu/Senkaku islands, to cite the findings of four American diplomats in a report to US Secretary of State Hillary Clinton.

Stewart Patrick from the US Council of Foreign Relations likens East Asia to Europe just before the First World War. It was then that Sir Norman Angel famously argued that the great European powers were so intertwined by trade and investment that conflict had become unthinkable. Nationalist emotions decided otherwise.

Any conflict over the Diaoyu/Senkaku islands would put the US in an impossible position since it is obliged by treaty to uphold Japanese control over the islands — and to go to war under Article V if Japan is attacked. The Noda government in Tokyo seems determined to hold America to that pledge.

Mr Patrick said that blank cheques to headstrong allies in the region could “set disaster in motion”, proving as dangerous as Germany’s blak cheque to the Austro-Hungarian Empire in 1914.

The Obama “pivot” in US geostrategy away from the Muslim World and towards the Far East — viewed by Beijing as the containment of China — should have been the central focus of the third Obama-Romney debate. It became instead a ritual repetition of cliches on Iran.

From leaks so far, it appears that Guangdong party leader Wang Yang and the national party organisation chief Li Yuanchao have been struck from the Standing Committee.

These were the two rising stars annointed by outgoing President Hu Jintao to carry through the great economic reform, averting the “middle income trap” that lies in wait for any catch-up nation that relies too long on cheap exports, imported technology, and indiscriminate state credit.

Their defeat looks like a triumph for status quo hardliners who claim that tight party control of banks and key industries shielded China from the global capitalist heart attack of 2008-2009. Whether they really believe this — or merely aim to safeguard vested interests — it is arrant nonsense.

China rebounded in 2009 because it blitzed the system with fiscal stimulus worth 16pc of GDP, and because credit growth running near 30pc each year had not yet run out of momentum. It was a short-term cyclical effect.

Similar claims were made about Japan a quarter century ago when it brushed off America’s 1987 crash with deceptive ease. We all had to listen to lectures from the Left on the virtues of Japan’s dirigiste MITI model, with its intimate cross-holdings of banks and corporate Samurai.

The contours of China’s excess are by now well-known. Investment reached a world record 49pc of GDP last year, a level unseen in other Pacific tigers during their growth spurts. Consumption has fallen to 37pc of GDP, from an already very low 48pc a decade ago.

Negative real interest rates and restrictions on investing abroad forced savings into a housing bubble, pushing home to income ratios to 16 to 18 or even higher in Beijing, Shanghai, Tianjin, and Shenzhen.

As premier Wen Jiabao likes to put it, China’s economy is “unstable, unbalanced, uncoordinated and ultimately unsustainable.” It is why his allies in China’s Development Research Centre (DRC) joined forces earlier this year with the World Bank to warn that the export-led growth model launched thirty years ago by Deng Xiaoping’s is now obsolete.

The low-hanging fruit of state-driven industrialisation has been picked. Stagnation lies in wait if the country clings to the dirigiste model. “China has reached another turning point in its development path when a second strategic, and no less fundamental, shift is called for,” they said,

“The forces supporting China’s continued rapid progress are gradually fading. The government’s dominance in key sectors, while earlier an advantage, is in the future likely to act as a constraint on creativity.”

Their report said the country risks hitting the sort of “invisible ceiling” that blighted Latin America in the 1960s and 1970s. Remarkably few states have managed to break out of the middle income trap and jump — as Japan, Korea, and now Chile have done — to the vastly higher per capita income levels of the OECD bloc.

China has used up its catch-up cards, reaching the Lewis Point where the flood of cheap labour from the countryside dries up. It faces a “wrenching demographic change” as the old-aged dependency ratio doubles to North European levels within 20 years.

Manufacturing wages have been rising by 16pc a year for a decade, outstripping productivity. The gains from now on must come the hard way — from inventive dynamism. That is nigh impossible in a top-down system where free thinking is suspect, and party bosses channel credit to pet projects.

“The role of the private sector is critical because innovation at the technology frontier is quite different in nature from catching up technologically. It is not something that can be achieved through government planning.”

The picture is not black and white, of course. China is a mosaic of different systems. The party allows local trial and error under its strategy of “crossing the river by feeling the stones”, but the state’s grip remains suffocating. The report said a quarter of China’s state companies are losing money. They have a productivity growth rate two-thirds lower than private firms, yet they gobble up most of the available credit.

We don’t know the the real state of official finances. The DRC said state enterprises have built up “large contingent liabilities” that have yet to be accounted for. It revealed two weeks ago that local government debt is out of control in a number of regions, with debt service costs exceeding 100pc of the total budget in 78 cities.

It said that 42pc of local debts come due by the end of 2012. Presumably they will be rescued by state banks in one way or another, but that merely perpetuates a broken model.

The World Bank and the DRC say there is nothing inevitable about China’s economic fate. Whether it succeeds or fails is entirely a political choice, and one that is being made before our eyes.

It has every chance of reclaiming its place it enjoyed in the early 1800s under the Qing Dynasty as a flourishing economic hub, before the onset of catastrophic decline, but only if it grasps the nettle now.

We will learn on November 15 as the Standing Committee takes in place on the dais — and from the exact order of entry — where the balance of power lies for the next ten years, the final ten years before China’s demographic crunch closes the window altogether. The omens have suddenly darkened.