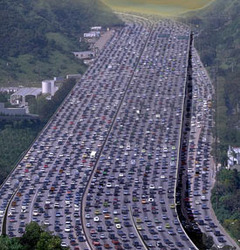 This one is for the the no good Keynesian deed goes unpunished files. As part of its 8 day Golden Week celebration, China’s central planners decided to do a good thing for the people and remove all tolls from expressways. That was the populist explanation. The fundamental one was that this act would somehow spur the economy. Alas, while the same people may have saved some transit money in the process, what they did not save was on transit times. As South China Morning Post reports, millions were promptly stuck in traffic jams as a result of the politburo’s generosity. From SCMP: “A bid by authorities to stimulate the economy by suspending road tolls for the “golden week” holiday brought huge tailbacks across the mainland yesterday as almost 86 million travelers took to the roads. That’s 13.3 per cent more than on the first day of the National Day holiday last year.” And then the fun began.”One traveller blogged that he could only move 200 metres in an hour on the Zhengzhou to Shijiazhuang expressway in Henan province. Others said the queue of cars on the Guangzhou to Shenzhen expressway was 40 kilometres long. All roads leading out of Guangdong were jammed, with cars moving at about a kilometre an hour in front of some toll gates. Provincial traffic-management authorities estimated traffic on expressways would increase by 40 to 80 per cent compared with the same period last year, the Shenzhen Special Zone Daily reported. The People’s Daily reported dozens of accidents on 24 highways across the mainland, further aggravating the congestion.”

From midnight on Saturday until midnight this Sunday – the duration of the combined holiday for yesterday’s Mid-Autumn Festival and National Day – passenger vehicles carrying up to seven people are exempt from paying tolls.

It’s the first time in decades that the government has suspended the notoriously high tolls for a major public holiday, with the move coming as consumption falls amid slowing economic growth….

The warning signs were there even before the tolls were suspended. In Guangzhou, cars began lining up before midnight on Saturday, waiting for toll-free travel to begin. Traffic was backed up at major expressway toll gates before dawn. Long lines were appearing on all 17 Beijing expressways by 6am, dashing many travellers’ hopes of making an early start to the holiday.

By the afternoon, internet users had made tens of thousands of microblog posts about the traffic jams.

“I set out at 5.30am and didn’t approach the border between Guangdong and Hunan until 4.30pm,” said Xiong Junhui , a Shenzhen resident, noting that the journey was roughly 400 kilometres.

Xiong and her husband were heading to Mang Mountain National Forest Park in Hunan, and expect the toll-free policy to save them between 300 yuan (HK$367) and 400 yuan on their journey. “It is worth waiting for a while on the road to enjoy the toll exemption,” Xiong said. “But the traffic jam makes me so tired, and now I already want to go home.”

So… no economic stimulus?

In short, Keynesian miracles 4ever! But don’t worry, next year’s Golden Week celebration and roat-toll suspension will have a different outcome.